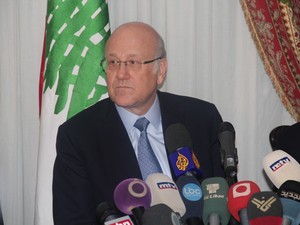 Prime Minister Najib Miqati held talks on Thursday with State Minister for Administrative Development Mohammed Fneish on the basis that should be followed in the next installment of appointments.

An Nahar newspaper reported that the meeting will discuss the mechanism adopted in the appointment of high-ranking positions in state that include 65 vacant job: 27 for Christians, 28 for Muslims, 1 for minorities and 5 for updated posts.

March 14-led opposition sources told the daily that “the first set of appointments revealed the majority forces are approving appointments based on appeasing all the parties within the camp in a step that would pave the way for their complete takeover of the institutions.”

“Appointing a Christian officer as the head of airport security is aimed at compensating for the appointment of a Shiite as the director-general of the General Security department,” they explained.

“It is an attempt to cover up the surrender of the Christians in the majority to Hizbullah’s command,” the sources added.

Meanwhile, security sources told al-Liwaa newspaper Thursday that there is a strong inclination to appoint Brig.-Gen. Ghassan Salem as Wafiq Shuqair’s successor at the head of airport security.

The sources revealed that Interior Minister Marwan Charbel is only just beginning to address the security forces appointments draft.

However, the subject hasn’t been discussed yet with the concerned officials in the directorate, the daily remarked.

Reliable sources said that there are crucial administrative appointments that need to be discussed including the appointment of governors, especially in Beirut and Mount Lebanon, and the president of the Lebanese University that is awaiting an agreement between Hizbullah and Speaker Nabih Berri.

“Hizbullah wants to reward former minister Adnan al-Sayyed Hussein for resigning the previous cabinet by appointing him to this post,” the opposition sources stated.

Sayyed Hussein’s resignation along with then opposition ministers led to the toppling of the government headed by former Premier Saad Hariri in January.

appointing a christian as head of the airport?cover up or maskhara?a christian in a 100 pct hizballah facility?what will he be doing,sitting in a chair on the roof with queen elizabeth....

He will be smoking narghile.