Report: Germany Seeking to Convince Saleh to Stand Down 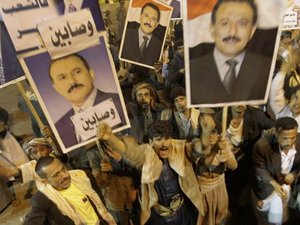 Germany is serving as an intermediary in a bid to convince Yemeni President Ali Abdullah Saleh to stand down amid a popular revolt against his three-decade-long rule, a newspaper report said Thursday.

Germany's daily Frankfurter Allgemeine Zeitung reported in a front-page article that Berlin had sent an envoy to appeal to Saleh to accept a proposal by the Gulf Cooperation Council and head off further bloodshed in the country.

Saleh has been hospitalized in Saudi Arabia for wounds from a bomb attack on June 3.

The report said a diplomat at the German foreign ministry, Michael Klor-Berchtold, delivered on behalf of Foreign Minister Guido Westerwelle the message to Saleh "that the GCC initiative is currently the only way to prevent a possible escalation of tensions to armed conflict".

The stalled GCC initiative would see Saleh step aside 30 days after an agreement was signed in exchange for immunity from prosecution, and a presidential election to be held within 60 days.

The newspaper cited Yemeni sources as saying that Saleh was open to the initiative but that his family had dissuaded him from signing.

Klor-Berchtold was the second high-ranking diplomat to see Saleh in Riyadh after the chief counter terrorism adviser at the White House, John Brennan, visited earlier this month, the report said.

After meeting Saleh in Saudi Arabia, the German envoy traveled to Sanaa for talks with government officials and the opposition, according to the newspaper, which said the mission had been closely coordinated with Riyadh, Washington and key European allies.

Saleh has ruled Yemen since 1978 and worked closely with the United States on fighting al-Qaida, but cooperation has been sharply curtailed this year due to the turmoil.

Since January, protesters have been calling for Saleh, who has been in power since 1978, to step down.

Yemeni security forces and government supporters have carried out bloody attacks on protesters, while opposition tribesmen have battled government forces in the capital Sanaa and elsewhere, and some military units have defected to the opposition.