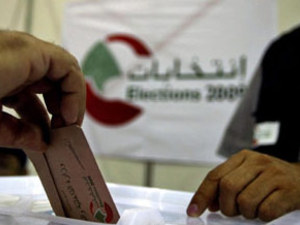 Lebanese political forces are preparing to hold private and broad meetings to determine their stances on the new electoral law that the cabinet had pledged to finalize.

It vowed in its policy statement to finalize it a year before the parliamentary elections are to be held in 2013.

The daily added that President Michel Suleiman prefers adopting a new electoral law based on proportionality to ease the current sectarian division, especially between the Sunnis and Shiites.

Bkirki sources told the newspaper that Maronite Patriarch Beshara al-Rahi said that he will call for a meeting at his summer residence in Diman to be held away from the media glare.

The sources revealed that the agenda of the meeting will include “the electoral law that the Maronites favors.”

Meanwhile, Interior Minister Marwan Charbel told An Nahar on Thursday that the electoral law is being discussed and will be ready in “three months at most.”

“I am exercising my duties and the decision is in the hands of the parliament,” he stated.

Concerning the participation of the Lebanese expatriates in the elections, the minister said that there is a certain mechanism that the Foreign Ministry is devising and the immigrants will have to submit their official papers according to it.

In addition, Charbel told the daily that the ministry is continuing its work in issuing and correcting Lebanese identification cards.

Wow.....! Mr. Miqati: is there nothing more pressing now than the election law.? Or is this one of the things you had to agree to to be appointed Prime Minister in "Principle". How about rising inflation, fuel prices, jobs for those graduates, illegal confiscation of public property, and maybe some electricity while you're at it. I feel you are in a hurry to change the election law to suit you and your allies in case your government falls, and my hope it will soon.

EXPATRIOTE in Canada (Guest) over 8 years

Wow! Many of the third world countries allow their expatriate to vote from abroad. It seems that the Lebanese government welecomes our tourist dollars and investments, but does not want us to have a say in who is elected. Our Phoenician ancestory would be ashamed of what have became!