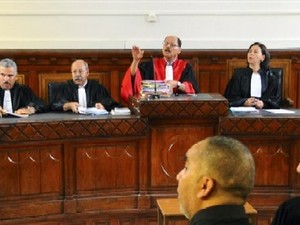 The former ruler is accused of having personally intervened to enable his daughter and her husband to buy two plots of land -- at well below the going rate -- in an upscale district of the Tunisian capital.

In the second case, Ben Ali and his son-in-law are accused of having acquired a plot in the same neighborhood initially intended to be a park but subsequently reclassified as building land, considerably boosting its value.

Judge Abdel Jridi noted that the defendants were all absent despite the fact that officials had issued international warrants and requested Ben Ali's extradition. Sakher el-Materi has fled to Qatar.

Ben Ali and his wife fled to Saudi Arabia in mid-January after being forced from power by a popular uprising. Since then, he has already been twice convicted and sentenced in trials held in his absence.

On July 4, a Tunis court sentenced him to 15 and a half years in jail for possession of arms, drugs and archaeological artifacts -- and fined him 54,000 Euros.

And last month, Ben Ali and his wife Leila Trabelsi were sentenced to 35 years in prison and fined 45 million Euros for misappropriating public funds after police found large sums of cash and jewelry in their palace.

Ben Ali denounced his first conviction a "parody of justice" and "political liquidation" in a statement issued last month.

But he and his entourage face possible legal proceedings in around 180 other cases.