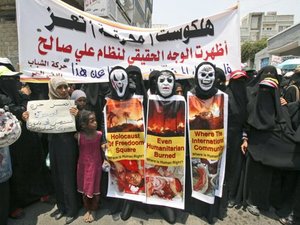 Yemeni Republican Guards shot dead one protester and wounded three in the second-largest city of Taez on Thursday, medics said.

The Guards opened fire as thousands of people protested against the regime of President Ali Abdullah Saleh in central Taez, a flashpoint city south of the capital Sanaa, according to organizers.

It is the first time a protester has been killed in weeks in Taez, one of the first cities to rise up against Saleh's rule.

Protesters said on May 30 that forces loyal to Saleh had killed 21 protesters as they crushed a four-month-old sit-in in Taez.

The U.N. human rights office said the next day that more than 50 people had been killed since May 29 by pro-regime forces in Taez.

Tribesmen who said their aim is to protect protesters have since June battled security forces loyal to Saleh in Taez.

Seven civilians were killed and 30 wounded in Republican Guards shelling in Taez on July 15, a security official said, while three security personnel were killed in an ambush by opposition tribesmen.

Tribal sources and witnesses said that four tribesmen and three civilians were wounded in the ambush.

Yemeni protesters have since January been calling for Saleh, who has been in power since 1978, to quit office.

He has been receiving treatment in Saudi Arabia since early June for wounds sustained in a blast at his palace, but Deputy Information Minister Abdo al-Janadi said on Saturday that Saleh will return home from Saudi Arabia "soon."