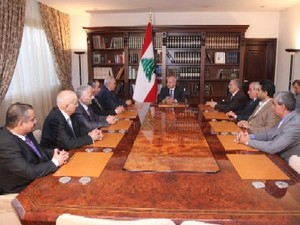 President Michel Suleiman urged on Thursday politicians to prevent political disputes from affecting social affairs, “which are at the heart of democracy”, the National News Agency reported.

“There are many projects related to social affairs that are waiting to be approved,” he said during a meeting with General Labor Confederation Chief Ghassan Ghosn and an accompanying delegation.

The president added that the cabinet vowed in its policy statement to address the citizens’ social issues.

He noted that the region is at the doorstep of a new “democratic scene,” stressing the importance of “taking advantage of the situation.”

Suleiman added: “We have to improve our democracy and implement the agreements of the national dialogue, which is an example of religious cultural dialogue.”

He stated: “Democracy cannot be complete unless citizens are given their simplest human rights from employment, to medical care, education and all the other social rights.”