Al-Rahi: We Oppose Politicians’ Exploitation of Disputes at Lebanon’s Expense 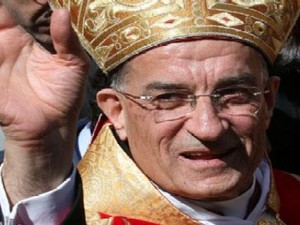 He said after meeting with a Phalange Party delegation: “We oppose political quarrels taking place at Lebanon’s expense because the country belongs to all Lebanese.”

“It doesn’t belong to one side more than the other,” he stressed.

“We have all presented sacrifices throughout history, so we should assume our responsibilities and support the institutions,” the Patriarch stated.

“Lebanon should remain above all over factional and foreign interests,” al-Rahi continued.

“We oppose the obstruction of parliament, the failure to elect a president, and the formation of a government all because of political differences,” he said.

The Patriarch also warned against dragging Lebanon into regional and international axes.

He therefore called on all sides to “unite in building the state and set people’s interests as a priority above all else.”

“It’s time that we devise a new national contract that can develop the national charter … because we have reached a point where no one trusts the other,” al-Rahi concluded.

Patriarch Rahi we all know that no one trusts each other in the country, MP Sami Gemayel in every interview or every tv appearance show he was in , said that at least 10 times, a dialogue IF it happens should be based on talks between all factions : chiites, christians, sunnis, druzes. They must adress each other's fears, needs, demands, all that in a calm atmosphere and a frank one, where Hezbollah accepts to discuss its weapons as a the top issue because this has scared everyone in the country, as well as March 14th be ready for a real plan that would benefit Lebanon and thus prove that they can provide weapons capable of protecting the country if Hezbollah disarms. But unfortunately till now, no one seem to give a damn about Lebanon, they are all power hungry, whether it be March 8th or March 14th,What a waste.

You must have your head up your rear end if you think Al-Rahi comments are an endorsement of your garbage. Who obstructed the parliament? Who prevented institutions from functioning? Who's dragging Lebanon towards regional axes?
Can you read?