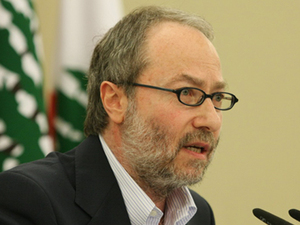 Lebanese Forces bloc MP Elie Kairouz on Thursday addressed a parliamentary question to the government via the parliament speaker on the circumstances of the abduction and release of the seven Estonians.

In a statement issued by his press office, Kairouz addressed a question to “Defense Minister Fayez Ghosn, Interior Minister Marwan Charbel and Justice Minister Shakib Qortbawi on the circumstances of the abduction, detention and release of the seven Estonian hostages … and the role of the Lebanese government and its judicial and military authorities in that operation.”

The lawmaker hoped the government “will answer our question within the timeframe stipulated by Article 124 of the bylaws of the parliament, or else we will have to turn our question into an interrogation.”

After returning to their Baltic homeland, the seven tourists said they were held in Syria for part of their four-month kidnap ordeal.

"We were held in three different secret locations by the eight terrorists, in both Lebanon and Syria. The big advantage was we were together, and that unity gave us the strength to believe we would see a happy end," Madis Paluoja told reporters at Tallinn airport.

"At one point we all lived in the same room with the eight kidnappers and their eight Kalashnikovs," he added.

The men, in their 30s and early 40s, were kidnapped at gunpoint on March 23 while on a cycling holiday in Lebanon's eastern Bekaa Valley, after arriving from neighboring Syria.

Interior Minister Charbel said they were released on July 14 in the Bekaa Valley town of Sahel al-Taybi.

The case had been shrouded in mystery, but nine people, Lebanese and foreigners, were detained in Lebanon in connection with the kidnapping.

Estonia turned to fellow European Union members and NATO allies, notably France, for help because the former Soviet-ruled nation of 1.3 million has only a small diplomatic presence in the Middle East.

"It was a quite long and very serious international operation and investigation. Many countries contributed to the probe, but I can’t mention details at the moment," Paet said.

The abductors -- believed to be a previously unknown group called Haraket Al-Nahda Wal-Islah (Movement for Renewal and Reform) -- had reportedly demanded a ransom.

The cyclists had appealed for help in videos posted on the Internet in April and May. The first video was uploaded in the Syrian capital Damascus, investigators determined.

In the videos, the men did not present any demands on behalf of their captors nor specify what country they were in.

A third video was emailed to several of their relatives in June.

"We were not told what the kidnappers want and we have no information about them asking for money," one of the cyclists said. "All the text we read in the videos was written for us."

This is a clear Islamic terrorism supported by Hezboshaitan and Syrian regime.
A history of abduction by radical musloms as a result of jealousy and an attempt to interupt the economic growth from turisim of the Lebanese nation.
this is a clear anti-Lebanese culture by he islamic world, Islam is to blame in this coward action.