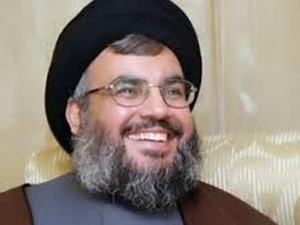 The meeting, which was also attended by Iranian Ambassador to Lebanon Ghazanfar Roknabadi, tackled the latest developments in Lebanon and the region and the means of possible cooperation between Lebanon and Iran, the press office added.

The Iranian delegation “lauded the Resistance’s achievements, especially in the July War.”

Nasrallah, for his part, extended his gratitude to the Islamic Republic for “everything it has offered to Lebanon and the Palestinian cause since the victory of the Islamic revolution in Iran until today.”

That's because there is no other country in the world other than Iran, it's the spearhead of all the world's progress, it's a superpower and it has invented everything from barbeque to the Internet.

Header should be President Nasrallah met the Iranian delegates or representatives. He is practically running the show now!

bigdig:
He is smiling so much for the pleasure you gave him. I guess that it was not mutually rewarding.

Look how happy he is after meeting with his bosses in the Backwards Islamic Republic of Iran.

Oh how he wants to drag us back to the 6th century too...

Iran is a huge, beautiful country. It has a lot of resources, great intelectuals and men of god who love you and your likes and who also think like you and share your values. Why don't you take your extended family and friends and go live there? You will be far from Israel so you will not need to worry and hide anymore. You can also take GMA with you, he will provide the light entertainment. He can dance, crack jokes, him and his side-kick Bassil l'Imbecile will keep you amused and you won't feel unloved or unwanted anymore.
Hello aan tizna!

it's nice to get a good head

Same story as we-know-who used to meet and dance with the Saudi kings and princes, when we-know-who was in power. History repeats itself over and over!

Why do you Cowards think they should Move to Iran, so you traitors can come out of your hiding holes in France, Long live Hizballah , Long live Assad and the holy Orthodox Church of Syria

Nassrallah went to Iran to pay tribute to his masters. I wish he cares about lebanon as much as he cares about Iran, but wait why should he, he is an iranian

He lives in iran.