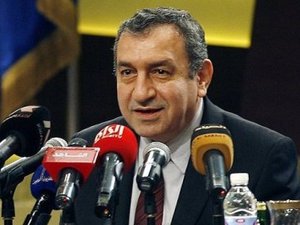 New ministers in a sweeping reshuffle of Egypt's cabinet were sworn in before the military ruler on Thursday, as the prime minister sought to appease protesters over the pace of reform.

"The new ministers in the government of (Prime Minister) Essam Sharaf took their oaths ... in front of the commander of the Supreme Council of the Armed Forces, Field Marshal Hussein Tantawi," the official MENA news agency reported.

Roughly half of the ministers in the reshuffled cabinet are new.

The changed line-up was meant to take office on Monday but the ceremony was delayed amid wrangling that led to Sharaf's brief hospitalization with exhaustion.

Sharaf had hoped the new cabinet would mollify activists who have been camped out in Cairo's Tahrir Square since July 8, but they have rejected the new line-up, which retains several ministers they want sacked.

"This government does not in any shape express our aspirations for the revolution," said Tareq al-Khouli, a leader of the April 6 movement and organizer of the sit-in.

But Mubarak's environment minister, Maged George, the only remaining Coptic Christian in the cabinet, was replaced by Maged Ilyas Ghattas, another Copt, according to MENA.

"We don't understand why they are being so obstinate about keeping former Mubarak party members, rather than replacing them with respectable people," Khouli said, adding the sit-in would continue.

Activists have called for a mass demonstration on Friday, dubbing it the "Decisive Friday," while hardline Islamist groups say they are organizing a counter-demonstration for "stability."

The protesters wanted Sharaf to replace Justice Minister Abdul Aziz al-Gindi, whom they accuse of delaying trials of former regime officials, including Mubarak himself.

New ministers have indicated their government would listen to activists' demands, with the new foreign minister, Mohammed Kamel Amr, telling Al-Jazeera television it was a "government of the revolution."

Deputy premier and public sector minister, Ali al-Silmi, told an Egyptian newspaper he wanted to end privatization, a policy for which Mubarak was praised by foreign investors but criticized at home.

"Enough privatization, especially after the end of the former regime which wanted to dissolve the public sector," Al-Masry al-Youm quoted Silmi as saying.

The antiquities ministry was dissolved after Sharaf's first choice, Islamic relics expert Abdul Fatah al-Banna, came under fire shortly after his appointment was announced on Monday.

Former state minister of antiquities Zahi Hawass, known for his trademark fedora hat and explosive temper, called the shuffle "a mess." Hawass had been appointed to the newly created ministry in Mubarak's final year in power.

"I don't want to be involved in it," Hawass, who was close to the Mubaraks, told Agence France Presse.

MENA reported that the Supreme Council of Antiquities, which oversees the country's vast and lucrative collection of relics, would answer directly to the cabinet rather than a ministry.

MENA reported that Tantawi, who served as Mubarak's defense minister for two decades, tasked the new cabinet with "quickly returning stability, calm and security and to confront any attempt to toy with the country's security.

He also called on the cabinet to prepare for parliamentary elections, most likely in November, and presidential elections, and to "scientifically plan for achieving the demands of the revolution."

It was the second cabinet to take office in the face of protests since a nationwide revolt overthrew Mubarak in February.

The former president is now under arrest on murder and corruption charges in a hospital in the Red Sea resort of Sharm el-Sheikh, undergoing treatment for a heart condition.

Sharaf's cabinet was sworn in weeks after the strongman's resignation on February 11, after mass protests persuaded the ruling military to sack Mubarak's last cabinet.