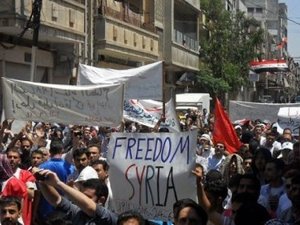 Syrian security forces shot dead two people on Thursday as they pressed their clampdown on dissidents in the central city of Homs, the capital and elsewhere, activists said, calling for mass protests.

"There was heavy gunfire in the al-Khalidiyeh, Baba Amr and al-Nazhine quarters (of Homs), and two people were killed," said Abdul Karim Rihawi, head of the Syrian League for Human Rights.

Rami Abdul Rahman, of the London-based Syrian Observatory for Human Rights, said "shots were heard in Homs from dawn. Most streets were deserted because of the military operations. Tanks were seen around the fortress and entrances to many neighborhoods were closed."

Saying security forces had "entered houses and made arrests," he added that "the army has erected barricades in all the streets, communications have been cut in most neighborhoods and the humanitarian situation is deplorable."

Activists say pro-regime gunmen have killed at least 22 people in Homs since Monday, including seven mourners at a funeral.

Syria's third-largest city, Homs has spearheaded demonstrations against Assad and his regime since protests erupted on March 15.

The army had already entered the city in May in a bid to stop rallies calling for the fall of the regime.

In Damascus, meanwhile, a wave of arrests was made in three quarters, with "searches by loyalist militants very violent," the Observatory said.

And in the southern town of Sueida, security forces had surrounded the local offices of a union, where some 70 lawyers and militants were holed up, rights lawyer Cyrine Khouri told Agence France Presse.

Amid the continuing crackdown, activists called for more protests countrywide after the main weekly Muslim prayers on Friday, following a pattern that has become standard in many parts of the Arab world since popular uprisings toppled the veteran rulers of Tunisia and Egypt earlier this year.

Using the Facebook site Syrian Revolution 2011, one of the motors of the revolt against Assad's autocratic rule, the activists said Friday's protests would be in support of the residents of Homs.

It appealed for a mass turnout to honor "the grandsons of Khaled and for national unity."

Khaled ibn al-Walid, a companion of the Prophet Mohammed known for his courage and military prowess, is buried in Homs.

Last Friday, more than one million people turned out across Syria -- mainly in the cities of Hama and Deir Ezzor -- to protest against Assad's regime and to demand the release of hundreds of detainees seized at earlier pro-democracy rallies.

Human rights activists said at least 28 civilians were killed, including 16 in the capital Damascus and a child, when security forces opened fire to quell last week's protests.

The activists say the government's crackdown has left more than 1,400 civilians dead since mid-March. Thousands more have been jailed.