Hizbullah Says Dialogue Must Be on Defense Strategy, Not Arms 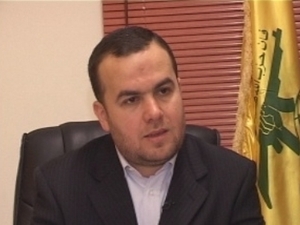 Loyalty to Resistance bloc MP Hassan Fadlallah on Thursday said that Hizbullah was willing to engage in a national dialogue “on the basis of building a defense strategy for Lebanon, but not on the basis of dialogue over the Resistance and its weapons.”

“Because we don’t believe there’s a dialogue topic called weapons or the Resistance,” Fadlallah added, stressing Hizbullah’s keenness on “rapprochement, cooperation and understanding” among the Lebanese.

“We have always said ‘come to the dialogue table and demonstrate what you have and we will confront argument with argument and evidence with evidence’,” the Hizbullah lawmaker said, addressing the rival March 14 camp.

“Those who would usually evade dialogue are the ones who have no rationale or valid arguments,” Fadlallah added, accusing the rival camp of “avoiding dialogue through … creating an uproar and waging a distortion campaign.”

“Can this camp offer guarantees to any Lebanese that Israel would not attack Lebanon another time? Can it say that there is a formula in Lebanon that is capable of protecting the country other than the army-people-Resistance formula? Can it offer us a defense strategy for protecting Lebanon?”

Fadlallah stressed that no one in Lebanon or outside Lebanon can change the so-called army-people-Resistance formula.

The other camp “chose to step down from power when it contributed to drafting the unjust (Special Tribunal for Lebanon) indictment,” the legislator added.

“Today, we can confidently and sternly say that this tribunal -- through which they wanted to target, harm and distort the image of the Resistance – has disintegrated and fallen apart, and no one can employ it any longer to create political changes in Lebanon,” Fadlallah said.

Shabby looking punk will never be a good agent for Hizb Mossad.. You're nothing but Inbreed trash

Is this the new lebanese flag behind him?

mr fadlallah, dont confuse urself between resisting el"adou el sahyuni" and arming one sect in lebanon, and the most important is the regime in syria,and seriously u are not guessing that we are going there??//

As long as there are militias Lebanon will never advance and will never see peace. Which stable country do you know allows a large militia to operate in their country? With Hezballah there will be wars and with them more and more of our young and educated citizens will leave the country.

... and you happen to be terrified of them shab

Sad to say this but looks like Hizb-Ashi al- Irani is never going to give their arms peacefully! They will learn lesson like the other sects of Lebanon who experimented with self-preservation

we keep hearing about Hezbollah arms and as if they are sacred ? and yer we have a government , a president, and a Parliament. and of course an army , what kind of country is this . if we have army and a state what so we need Hezbollah's arms for ?look around the world , there is not one respectable country that have a terrorist organization dictating to it's population what to do . i did say respectable

A Lebanon with armed militias will never see peace. Hezballah will eventually start another war with Isreal and cause more destruction in our country. What stable country do you know that allows a large malitia to operate in and control part of their country. The trouble these caused by militias, the greatest example being Hezbullah, will keep our young and educated fleeing this country.

“Can this camp offer guarantees to any Lebanese that Israel would not attack Lebanon another time? Can it say that there is a formula in Lebanon that is capable of protecting the country other than the army-people-Resistance formula? Can it offer us a defense strategy for protecting Lebanon?”

Army-people-resistance? Reverse that, did you mean militia-people-country?
July 2006, the Army-people-resistance attacked Israel when the Jets destroyed the country infrastructure? few years later Beirut streets were shutdown by the Army-people-resistance?
Yes the street fighting got the Russian out of Afghanistan, and it is over. To forecast that Iran will invade Kuwait, Emirates and Saudi Arabia, it did not prompt them to create and arm a militia to defend their land but rather re-enforce their army air capabilities.
When the Jets approach the Lebanese air space, EVERYONE will go 50 floors underground. So wake up and think strategically by making an Army face an Army as pre-1975 the Lebanese Army showed high capability and braveness against the enemy in many battles in the South.

And any lebanese who doesnt like it we will just shoot you, since we have guns and we can keep them and there's nothing yo can do about it

Second, I actually beleive FULL heartedly that I'd rather have Israel bomb Lebanon and us not having the power to defend our selves, than having such a militia controling the country.

This weapon you keep on protecting has lost all legitimacy, and it's disadvantages have long overpowered it's advantages.

Second, I actually beleive FULL heartedly that I'd rather have Israel bomb Lebanon and us not having the power to defend our selves, than having such a militia controling the country.

This weapon you keep on protecting has lost all legitimacy, and it's disadvantages have long overpowered it's advantages.

These guys are really clever! They want to discuss defense but not arms, arms but not their use, their use but not their caliber, their caliber but not their number, their number but not whoe they're directed against, who they're directed against but not who pulls the trigger, who pulls the trigger but not how many times, and on and on......stop thinking Mr Fadlallah that the Lebanese are iodiots, You are the idiot! There is no such thing as a Resistance in a peaceful country. Anywhere throughout history it's either there is a national resistance against a foreign invader because the existing state has crumbled, or because its powerless. Then the rise of a resistance and its eventual success leads it to take power as a ransom of that success. Nowhere else, at no time in history has a militi group been called Resistance to compete against an existing State structure and to steal its authority in every way. Its either you bow to the State , or you seize power.now the masks have dropped!

Its very funny to hear Mr Fadlalalalalala say that , he is living in some kind of mental hosptial where he thinks he is the only one sane and with a brain? you said what guarantees the other camp can give that Israel wont attack Lebanon? euh let me think :

- You kidnapped 2 israeli soldiers and this is what gave the excuse for Israel to wage war on us, so dont go saying you wantt guarantees when you are the ones trying to incite.

- Did you forget about what Hassouné said ? that you are infected by Mossad and CIA ?

- Maybe Mr Fadlallalalala, what you must do is shut up, go back to your cave with your pig master the zionist agent, it should be the '' other '' camp demanding some guarantees you are not working for Israel after all you have done of harm to the country you worthless creatures, cowards, traitors, servants of Persian, Syria and Zionist empires.

@ Eagle & Former Leb
I fully agree.
Also, I love it when he says “ Those who would usually evade dialogue are the ones who have no rationale or valid arguments” ... errrr..... ok, then let your 4 thugs dialogue with the STL Juges then! ;)

Hezbollah uses the threat of Israeli invasion to justify their existance.

They hope that the Lebanese people will never figure out two important facts:

1) That an Israeli attack will only happen if Hezbollah provokes one, as in 2006.

2) That Lebanon's internal security is our greatest need and Hezbollah is the greatest threat to this.

@Truth and to those who care to listen:

You are absolutely right in your analysis, spot on. We all studied history, and every resistance that succeeded in defeating the invaders swept to power, just a few examples: The French and the Russians, but to name a few. What is unique about the thugs we have here in lebanon: first, there are no invading armies anymore; their fake so called resistance is based on their sect and has no national consensus; unlike resistance as we know it and studied, their agenda is tied to outside and regional instead of internal and nationalistic objectives. They are a unique breed, like a mutant germ or bacteria that changes form and objectives. They have taken us hostage to some primitive "wooden" devilish ideology never seen perhaps since the stone age. Their off shoot religious beliefs are based on hatred, revenge, and a grudge against their fellow brothers in the same religion. They carry and live a grudge that happened more than 2000 years ago!

It is the state which is charged with defending the natal territory. The existence of an armed foreign force on Lebanese soil, the state is correspondently weakened thus justifying the continuation of the existence of this auxiliary force. The Hezbollah argument is circular and is not justified.
the LF was in this place before in the 1980's justifying itself on the weakness of the state and state institutions. The armed LF ended at Taif following the war between it and the Lebanese Army. The LF also trident for the mini-state,but this failed as will the Hezbollah effort.
There is no defense strategy for Lebanon as long as Hezbollah remains armed and in open defiance of it's own Ministerial Policy Statement.
But for the bellicose nature of Hezbollah and it's existence outside of any government that would relate it's conduct and be accountable to the international community, Lebanon would have no urgent need for an extraordinary defense policy for Israel.

What is the Syrian extraordinary defense policy for Israeli? Does Syria have the need for "the state, the army, the resistance formulation. Lebanon does not have any of it's national territory occupied by Israel. The shebaa district is Syrian territory, not Lebanese.
Syria, on the other hand, has had it's occupied territory formally annexed by Israel. Let Hezbollah go to Syria and "resist" from there. The need is greater there than in Lebanon.

No necktie and no shave, and no mrs Lebanese flag in the picture, only the Hezbollah flag. Sometimes, a picture is worth 1000 words.

shame on this party which has nothing to do with resistance except resistance against lebanese constitution and laws.....

shame on you and those who support you!