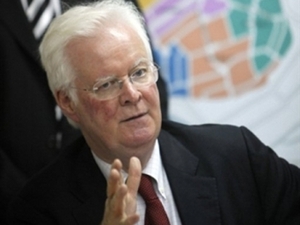 "There is a great worry in Lebanon about this," said Williams, who raised the potential for "confessional clashes in Lebanon."

"What comes after (in Syria) worries in Lebanon," he told a news conference.

Activists say the Syrian government's crackdown against opposition protests has left more than 1,400 civilians dead since mid-March. Thousands more have been jailed.

Ties between Syria and Lebanon are complicated by a lengthy and bloody history. Syria only withdrew its troops from Lebanon in 2005 after three decades of military and political domination.

Williams stressed, however, that the situation remained calm along the U.N.-drawn Blue Line separating southern Lebanon from Israel.

"Remarkably, despite tensions and despite some incidents, that resolution has held very well," he said, referring to U.N. Security Council Resolution 1701 that ended hostilities between Hizbullah and Israel after the devastating 2006 war.

"While the cessation of hostilities has held well, there is no movement towards a ceasefire."

Williams said the time was right for "a dialogue, a process to discuss the questions of arms, not only Hizbullah."

There have been frequent accusations from Western powers that Syria has been arming Hizbullah despite U.N. resolutions banning such traffic.

So what ? let it happen. Long live free Lebanon and Syria. This will be the en of the Iranian monkeys and their sheep

Yes shab, who cares if thousands of lebanese are killed as long as you can sit and watch with popcorn fellow lebanese being slaughtered to please your hate for hezballah. You sit behind your screen all day and night wishing destruction of lebanese and you want others to die for your cause. Go liberate lebanon if you really think its occupied you coward. God bless hezballah and may they continue to be a thorn in the eye of filth like you.

normal no?
when some lebanese are still the syrian dogs they just want to imitate their masters....and keep their power and money