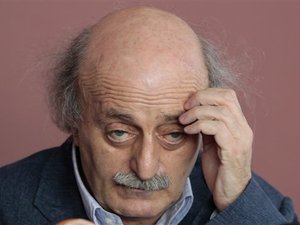 Progressive Socialist Party leader Walid Jumblat has unveiled that he held a telephone conversation with former Premier Saad Hariri thanking him for his latest stance on Jumblat.

The Druze leader told An Nahar daily published Friday that he heard “moving words” from Hariri but refused to give further details.

Jumblat, who returned along with Minister Ghazi Aridi from Moscow on Wednesday night, said that Russian Foreign Minister Sergei Lavrov has welcomed Hariri’s statements and decision not to close the dialogue door with Hizbullah leader Sayyed Hassan Nasrallah.

Breaking a nearly four-month silence, Hariri told MTV last week that he was ready to meet Nasrallah but in the presence of witnesses.

“I have never been against dialogue. I am ready for dialogue for the interest of Lebanon. But with complete frankness, if I talk to Sayyed Hassan I want to have witnesses,” he said.

“Lavrov advises the Lebanese not to take their country to the lines of tension,” the PSP chief told An Nahar. “This behavior does not serve Lebanon.”

Jumblat unveiled that Russian military assistance to Lebanon has made a major leap forward. “It is even ready to help in the railway sector.”

On the local situation and differences between the March 8 and 14 forces, the Druze leader said: “The new political alignment should not prevent contacts between the different parties.”

He stressed on the importance of respecting the point of view of others and insisting on dialogue. Hariri and Nasrallah should hold talks because “we are compelled to coexist and no one could abolish the other.”

Jumblat backed President Michel Suleiman’s invitation for all-party talks at the Baabda palace, saying dialogue should be aimed at agreeing on the defense strategy on condition that arms are not used locally.

He also stressed that Premier Najib Miqati’s cabinet should “not adopt reprisal policies” against March 14 officials.

Well done Joumblatt, well done Lavrov. You should cheer the one who is accepting to sit on the table with those who have fooled the country so many times, sponsored planned executed -as it seems - not only the killing of a former PM, but much more, for the only good reason , not only are they unrepentent, but that the criminal this time, in order to protect himself, to get away with his horrendous depicable criminal attitude, threatens to do much more, against whole communities, against a whole country. And that is called stability, preaching for stability, that is called wisdom, that is summed up by the slogan 'no one is bigger than his own country ' ( how about Badreddine and Nasrallah, are they bigger!) that is brushing away all what happened until ........the next killing fields are back all over again!

The room to manoever could be limited for the time being bigdig, but you don't hand the armed thief the key to the coffers for that matter! Soe time something somewhere is going to change the equation, be it through a regime change in Syria, be it through an american policy change towards Iran ( in particular if Republicans are back in the US), then things won't be the same. Ceaucescou and Milosevic are in the dustbin of History. Others may soon follow...

History taught us not to listen or trust Jumblat.

Mowaten One could easily argue that injustice IS civil war in itself, and not the other way round,cause it will lead people or communities to take matters in their own hands. Obviously you cannot fight the bear bear hands ! Remember the David and Goliath story...Foxes survive better than hyenas.
I will not admit to the logic that total submission under latent threats as the only possible way forward. This would be tantamount to a free pass to do more of the same in the future.And that is even a bigger risk than nailing the culprits down, when that becomes possible. They should be pressured unrelentlessly.

We have talked enough..... these thugs understand one thing and one thing only: An eye for an eye and a tooth for a million teeth!!!! They are a cancer that needs to be extracted by any and all means.

Can we telephone him too? Got a few things to say.

Bigdig this his the tide of history and you can't stop it. We're not counting on Another Bush but on the Syrian people, even if the pasdaran and the hezb fighters push theultimate deadline a bit further out. The punishment will eventually come and will be severe. It took 10 yrs to wait for Saddam to be taken out him and his 2 glorious siblings.the only strategic mistake he made is to open for Iran floodgates to the mediterranean. He should have taken both out at the same time! 8 yrs is not too much waiting the hope some cleaning job will qeventually take place. As to be booted out of power by foul players there is no glory in that to the Ashraaff! There is no glory in beating Mike Tyson in a fight wearing an armure and a helmet. You remain what you are, a moserable coward and a worm!

no bla bla bla it all depends on the situation of bashar and his gang rewgime.
n.b.by " situation" i mean the civil war in the shaqiqa,dont fool urself just wait.

Sure Hezbollah wants dialog now that it holds all of the cards in it's hand. Hezbollah still has IRS weapons outside of the command and control of the government, and, it has the government.
Dialog is supposed to be about multiple parties coming to ether and negotiating to a mutually beneficial result. This cannot happen as long as Hezbollah is armed and has shown the capacity to use those arms or the mere threat of use thm to politically politically negate the other side.
Hezbollah's call to dialogue is not a call foe coexistance. It is a call for the cloak of legitimacy from the M14 parties. Withholding this grant of legitimacy is the last card that M14 has, vis a vis M8. So the call to dialog is a call to M14 to surrender all power, to capitulate and to commit political suicide.
Hezbollah lacks the power to eliminate M14 by force of arms, so it wants M
14 to self terminate by granting the cloak of legitimacy to this coup government.
To M14, tell M8 - NUTS!

So Russia has lifted it's veto now. Syria will be bombed. Hurray

@bigdig.
You seem like you know what you are saying sometimes but then I read some of your other posts and wonder if you're bipolar. If Bush did bomb Iran, which many of his supporters wanted him to do, he would have been condemned further by the international community. I, for one, believe that history will record Bush to have done the right thing, albeit, a little poorly.

It's the eternal dilemma: succumb to the guy with the gun, or keep your dignity and possibly face dire consequences.

Jumblatt is betting that appeasement will work for now, until something changes, and he'll change his colors again. This has worked for him reasonably well in the past.

what a portrair for Jumblat!! he looks like some one exciting for dialoge!!

This guy is only for his bank account. where did he get the 20 mil to buy land in clemanceau? is that what he got paid to topple the m14 gov? Now he is playing with the russians. mmmmmmmmm what is he up to? I am losing faith in God because of people like him. If there was a God all people in power in lebanon should be rounded up and put in jail . I bet even God left lebanon.
Lebanon is hell on earth nothing but evil is roaming its streets and gov. No one have the cure unless these people governing it are gone . I will only beleive in God when this happens. I am asking God to show me the proof that he does exist. Only the bad people survive in this world. Is it only me or are there others who think the same way i do?

Bayer A. Leve (Guest) over 8 years

Please somebody give this guy an Advil look at him he's obviously got a headache.

funny the concept of dialogue among the M8 brainwashed supporters...

we have the gun on your temple and we are ready to dialogue...
you must agree with us and then we can dialogue!!!!

strange way to dialogue and they accuse M14 to want a civil war?
pathetic...
how dare they say they want to build a civiilsed state with manners from the middle ages....

M. Jumblatt eg the houseboy of mohammad nassif & cie knows that each time he praises Sadd Hariri the latter looses numbers of his 14 Marcher supporters. In Jumblatt & Assads Gang minds, Hariri is a naive person who can be easily manipulated/operated. Jumblatt's (& Suleiman) present تذاكي with Hariri in the out of date Lebanese way is seriously intended to bring Hariri (& 14 March) to join the rancid smelling buffoonery called Dialogue table. 14 March should simply encourage Jumblatt, Sleiman, Mikati, Hazbal & the rest of the bunch to dialogue between themselves. الطيور على أشكالها تقع. Lebanese will just laugh. No need to be a genious to foresee that any 14 March accepting even under conditions to be a part of such a garbage means nothing but suicide in terms of popularity & support.