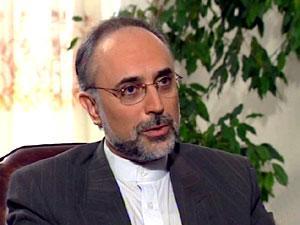 Iran may consider dialogue with the United States as long as it is between "equals" and Washington respects its people's rights, Foreign Minster Ali Akbar Salehi said in an interview Friday.

"We have not ruled out establishing relations with other countries barring the Zionist regime (Israel), but it is possible that our relations are in an unusual situation with countries like the United States," Salehi told the official IRNA news agency.

"If one day the United States agrees to a dialogue on an equal footing and without preconditions, while respecting the rights of our people, the situation will be different," he said.

Iran and the United States have had no diplomatic ties for more than 30 years, and relations have soured in recent years due to Tehran's nuclear drive and policies in the region.

"I think today we can utterly negotiate on an equal footing and mutual respect with the United States," Rafsanjani told reformist website, irdiplomacy.ir.

Referring to Tehran's disagreement with the West over its nuclear program, Salehi said: "No dispute is eternal and one day the Iranian nuclear dispute will be resolved.

"We seek a win-win solution, and if the Westerners believe in this, they can come to the negotiating table. We are ready. If they do not, they can continue, because the pressure will only strengthen us.

"If they want to continue for 30 more years their policy (of pressure and sanctions), we will not yield... because we have decided to pay the price for our independence," the minister said.