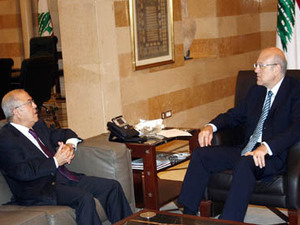 The recent dispute between Lebanon and Israel will be a top priority for the Lebanese parliament when it meets on Aug. 3 and 4 and a main concern for the government in its effort to prevent the Jewish state from launching an aggression on Lebanon’s oil and gas fields.

As Safir newspaper said Friday that MPs from major parliamentary blocs could be tasked with preparing a draft-law that confirms Lebanon’s rights on the fields in the contested areas.

Head of the parliamentary public works committee Mohammed Qabbani held talks with Premier Najib Miqati in his regard. “Our objective is to establish a full coordination between parliament and the government to prepare draft laws” on the issue, Qabbani told As Safir.

But a law on setting Lebanon’s maritime borders and its Exclusive Economic Zone is a priority, he said, adding “we are working on readying it for (discussion during) the next parliamentary session.”

Energy Minister Jebran Bassil also confirmed to the daily that the dispute is a priority for Premier Najib Miqati’s cabinet. “The achievements that haven’t been made between 2007 and 2011 were made in a couple of weeks.”

“If we continue in the same direction, this will be a huge success for the government,” he said.

“Neither the U.N., nor any state in the world can tamper with Lebanon’s maritime and economic borders,” Bassil said in response to a question.

Bassil met with Miqati at the Grand Serail on Friday.

U.N. Special Coordinator for Lebanon Michael Williams said Thursday that maritime border disputes are often resolved under the U.N. Convention on the Law of the Sea which includes provisions for an independent arbitration panel and settling differences at the International Court of Justice.

While Lebanon has ratified the convention, Israel has not, and because the countries don't have diplomatic relations Williams said "it's difficult for the U.N. to find a way forward here."

BRAVO! Finally some focus on what's really important for the country instead of all that other nonesense...

The Lebanese Government really needs to get it's finances in order. Exploiting offshore oil & gas resourcing should be the number 1 priority.

My advice to Mr Mikati is: sign-up CHINESE companies asap!!! And use this as an opportunity to develop close ties to China, which is quickly becoming the world's only real superpower (as the West is painfully recognizing) for political, military and economic support.

Another plus is that is that Chinese presence and interests in the region are a great deterrent against Israel keeping it's claws off of Lebanon's right to it's own offshore resources.

“Neither the U.N., nor any state in the world can tamper with Lebanon’s maritime and economic borders,” Bassil said in response to a question.

Mr. Basij....ooops... I mean Mr. Bassil: Have you noticed fuel prices are creeping up again? I recall your press conferences a couple of months ago in which you said you refuse to sign the list prices if they included any price increases..... what happened now? I see..... now you have a different finance minister and no need to sabotage anymore since you all are of the same chemistry.

“The achievements that haven’t been made between 2007 and 2011 were made in a couple of weeks.”

I guess it is true then you are "The Miracle Child"....! Let me get this right: so in previous governments since u have been a minister forever, you went to Saniora and/or Harriri and told them you want to protect Lebanon's maritime borders ya batal and both said to you "No"? WOW..... really traitors.... bas enta Batal.