Salehi Hopes for End to 'Misunderstandings' with Saudi Arabia 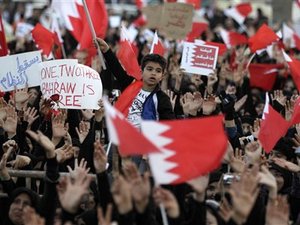 Iranian Foreign Minister Ali Akbar Salehi said on Friday that he hoped "misunderstandings" with Saudi Arabia could be resolved after a war of words erupted over its military intervention in Bahrain.

Salehi said that Iran respected the sovereignty of Sunni-ruled Shiite-majority Bahrain and hoped that a national dialogue launched by King Hamad after the March crackdown on Shiite-led protests would bear fruit.

"We have no particular problem with Saudi Arabia and we regard it as an important country in the region that has influence on international affairs," Salehi said in an interview with the official IRNA news agency.

"We have had friendly relations with Saudi Arabia for a long time. After recent events in the region there were differences of analysis and interpretation," he said without elaborating.

"I believe these misunderstandings can be resolved. I hope that we will find an acceptable way to continue consultations between our two countries."

Salehi's overture to Saudi Arabia came after a sharp downturn in relations in the months since Saudi-led troops intervened to help Bahrain's Sunni rulers put down the Shiite-led protests.

Several Iranian officials and Shiite clerics have spoken out against the intervention, drawing an angry response from Gulf Arab states.

Salehi insisted that Iran "respects the national sovereignty and independence of Bahrain and wants peace, stability and security in Bahrain."

"We think that the Bahrain issue needs to be settled between Bahrainis," he said.

"We have political relations with the government of Bahrain and we regard as positive the decision by the king of Bahrain to launch a dialogue with the people. We hope that this dialogue will allow a solution to be found."

Iran received a formal protest note from the six-nation Gulf Cooperation Council (GCC) on Monday after senior Iranian cleric Ayatollah Ahmed Janati used a sermon at the main weekly prayers in Tehran on July 8 to criticize the Bahrain crackdown and dismiss the dialogue as a "ploy."

Janati said that the protesters in Bahrain had done nothing more than call for "one person, one vote," and hit out at the prosecution of doctors and academics for their part in the protests.

In a major blow to the national dialogue, Bahrain's main Shiite opposition bloc, the Islamic National Accord Association (Al-Wefaq), which took a majority of the vote in the last parliamentary elections, announced on Sunday that it was pulling out, saying the talks were not aimed at achieving serious results.