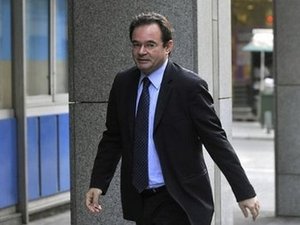 Greece admitted on Monday that it is in breach of conditions for a new installment of its 110-billion-euro bailout as the IMF and European Union begin an audit of its austerity cuts.

The EU's statistical agency Eurostat issued its final revision of Greece's accounts for the past four years, triggering a new forecast by Athens that its public deficit this year would reach 9.4 percent of output, breaching a 8.1-percent target.

Greece, which flirted with insolvency until it was rescued by the IMF and EU in May as a result of an unprecedented crisis in the eurozone, sought to reassure.

It noted that it had reduced its deficit by a greater percentage than pledged as part of the 110-billion-euro (150-billion-dollar) rescue from the European Union and International Monetary Fund.

"Despite the revision of the figures, the 2010 deficit reduction is greater than was initially planned, equivalent to six percentage points of GDP when the objective was to get 5.5 percent," the finance ministry said in a statement.

The 8.1-percent target was set when Greece's 2009 public deficit was estimated at 13.6 percent of GDP.

As part of the bailout, Greece was obliged to allow Eurostat to review its unreliable accounts, and on Monday the EU agency revised the 2009 deficit up to 15.4 percent.

The 2009 figure is important because it is the baseline for the amount by which Greece must cut its public deficit this year as a percentage of gross domestic product. The bigger the deficit last year, the more it has to do to meet rescue conditions this year.

The announcement was awaited with much concern in Greece as it may entail further deep spending cuts that have already provoked strikes and demonstrations.

"The stabilization of the budget will continue within the objectives defined by the economic and financial programme signed with the European Union, European Central Bank and International Monetary Fund towards a public deficit below three percent (of GDP) in 2014," the Greek finance ministry pledged.

On Monday, senior officials from the EU, the European Central Bank and the International Monetary Fund began a review here of radical action by the government to redress public finances with structural reforms.

The government is to present its 2011 budget to parliament on Thursday.

Socialist Prime Minister George Papandreou said on Sunday that talks were underway on the possibility that Greece might be able to prolong the period of repayment of the rescue funds beyond the intended date of 2015.

The EU-ECB-IMF team will decide at the end of its mission if a third installment of its rescue package worth 9.0 billion euros.

The country has already received 30 billion euros in exchange for measures aimed at curbing spending, notably through radical austerity measures and deep reforms of the economy.

The Greek economy shrank by 4.5 percent in the last 12 months, official data showed on Friday. Gross domestic product contracted by 1.1 percent in the third quarter.(AFP)