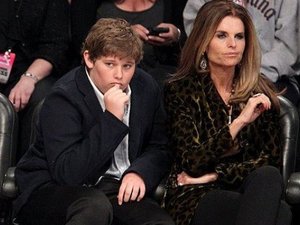 Arnold Schwarzenegger's 13-year-old son with estranged wife Maria Shriver is recovering after being seriously injured in a surfing accident, the couple said Friday, describing it as "scary."

Christopher Schwarzenegger has been in intensive care since suffering broken bones and a collapsed lung in the boogie-boarding accident in Malibu last weekend, according to People magazine and the TMZ celebrity news website.

"A few days ago, our son Christopher suffered an accident at the beach," former California governor and movie star Schwarzenegger and Shriver said in a joint statement.

"While it has been a very scary week, Christopher is surrounded by his family and friends. He is a brave boy and is expected to make a full recovery."

A source told People magazine that the teenager had been in intensive care since last Sunday, adding: "Maria has not left his side and is sleeping at hospital." TMZ said his condition has been upgraded during the week.

Former bodybuilder and politician Schwarzenegger, who put his film comeback on hold after announcing a split from his wife in May, has visited his son in hospital as well, said TMZ.

The injured teenager's 17-year-old brother Patrick tweeted: "Thank you everyone for your messages about my brother. This kid is strongest kid I ever seen. Keep praying."

"Thank you guys for your concern and prayers for my baby brother! He's a tough little guy and getting better! Please keep praying for him!" added his older sister Katherine Schwarzenegger, on her Twitter account.

The accident was revealed a day after it emerged that Schwarzenegger is refusing financial support to Shriver once the couple, reported to be worth $400 million jointly, are divorced.

Shriver filed for divorce three weeks ago citing "irreconcilable differences" with her husband, whom she married in 1986, following his admission in May that he fathered a child with the couple's housekeeper.

In filings to the Los Angeles Superior Court on Wednesday, Schwarzenegger said he would refuse spousal support, while seeking joint custody of their two minor children, Patrick and Christopher.

The Austrian-born former bodybuilder, a liberal Republican, had left office in January, and started to return to show business, with plans for a "Governator" comic book and animated TV show.

But he put his comeback on hold in May, telling his agents that "all his motion picture projects currently underway or being negotiated (should) stop planning until further notice."