'The Walking Dead' to Explore 'Monsters Inside' 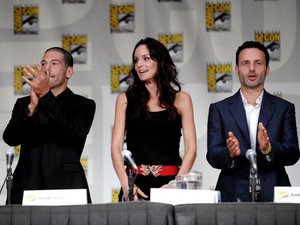 Flesh-eating zombies aren't the only worry in the second season of "The Walking Dead."

Sarah Wayne Callies, who plays one of the survivors in the hit AMC zombie apocalypse saga, teased during a Friday panel at Comic-Con that "the most dangerous things out there are the monsters inside."

The cast and crew of "The Walking Dead" have been filming the sophomore follow-up to the six-episode first season this summer.

A trailer featuring the survivors trying to evade a horde of oncoming zombies amid a traffic jam and contemplating breaking up the group was shown during the panel. At one point, the character Rick Grimes warns that "it's all about slim chances, and a slim chance is better than none."

At the beginning of the panel, the executive producers announced that the 13-episode second season will premiere Oct. 16.

"We absolutely could not wait for Halloween, so we're coming at you a few weeks early," said Robert Kirkman, executive producer and creator of "The Walking Dead" graphic novel series, which the TV is based on.

Frank Darabont, the show's creator and executive producer, promised the more than 4,000 fans packed inside a San Diego Convention Center ballroom that the second season picks up about five seconds after the first season finale, when the survivors dejectedly drove away from the destroyed Centers for Disease Control and Prevention in Atlanta.

"There's none of this (expletive) six-months-later stuff," said Darabont.