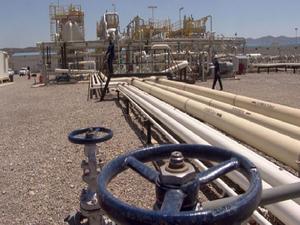 "The actual pumping into the pipeline began today with 40,000 barrels per day from the Al-Ahdab oil field," Shahristani told Agence France Presse, adding that within days the volume would increase to 60,000 bpd.

"The 400-kilometre (250-mile) pipeline will transport the crude to Toba," Iraq's largest oil storage facility, located in the southern port city of Basra, he added.

"Exports from Toba will begin on August 1," Shahristani said.

The Al-Ahdab oil field, near the city of Kut in central Iraq, is operated by the China National Petroleum Corp. Production began on July 1, with 60,000 barrels, which officials say is expected to double by the end of this year.

The contract with CNPC, signed in 2008, allows the Chinese company to develop the field for 23 years.

Output will mostly be exported, but some will be used to fuel power generation stations nearby to ease electricity shortages.

Under the agreement, CNPC will charge a service fee of $6 a barrel, decreasing it eventually to $3.