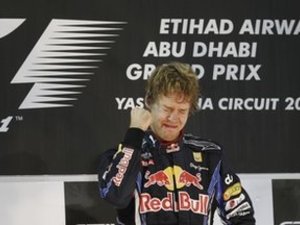 Sebastian Vettel became the youngest champion in Formula One history Sunday, clinching the title when he won the Abu Dhabi Grand Prix and Fernando Alonso faltered in the season-ending race.

The 23-year-old Red Bull driver started from the pole trailing Alonso by 15 points in the standings. While Vettel had a fairly trouble-free race, Alonso finished seventh after Ferrari made an ill-advised decision to pit early and the Spaniard got stuck behind Nico Rosberg and Vitaly Petrov for nearly 40 laps.

"It has been an incredible journey, to lead the championship after the last race is unbelievable," Vettel said. "It's been extremely intense, and a tough season mentally."

The German is six months younger than Lewis Hamilton was when he won the title in 2008.

Vettel's championship caps a season in which Red Bull regularly dominated the field in qualifying, but often failed to convert its unrivaled speed into race victories because of reliability problems and driver errors.

Alonso, who started third on the grid, ended up four points behind Vettel in the final standings.

"It was a tough race, a difficult race," Alonso said. "We lost one position in the start and (in) the first safety car period Petrov and Rosberg came in."

Vettel didn't know the situation behind him during the last 10 laps due to a problem with the race radio and had a few nervous moments at the end, waiting to see whether Alonso could rise to fourth place on the last lap and earn enough points to take the title.

The celebrations finally started when he received the message he was hoping for.

"Unbelievable! Thank you," Vettel replied in a strained voice, barely able to speak as Red Bull engineers and crewmembers threw themselves into each other's arms.

Alonso couldn't hide his disappointment, shaking his fist angrily as he pulled up alongside Petrov when they glided over the line.

Hamilton beat defending champion Jenson Button to give McLaren second and third place in the race.(AP)