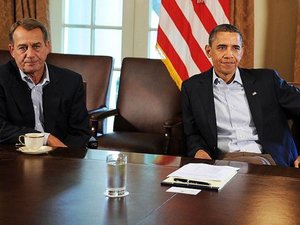 Vice President Joe Biden also participated in the Cabinet Room meeting which came just a day after talks collapsed as part of efforts to avoid an August 2 debt default.

It was not immediately known if any progress had been made on Saturday as Congress leaders left the building without making any statements.

Ahead of Saturday's negotiations, Obama renewed his demand that any final deal raise tax revenues from the rich and wealthy corporations, a proposal fiercely opposed by his Republican foes who quit the talks over the issue.

"That's the heart of this approach: serious cuts, balanced by some new revenues," the president said in his weekly address, forecasting "plenty of haggling over the details in the days ahead."