Aussie 'Spiderman' to Live, Sleep with Hundreds of Arachnids 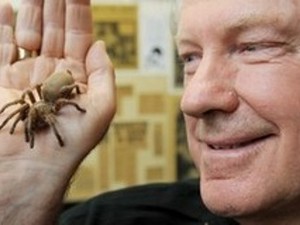 An Australian man Monday said he was "a bit silly" to live in a shop window with hundreds of poisonous spiders for three weeks for charity, but was confident he would not be bitten.

"Spiderman" Nick Le Souef hopes to raise as much as 50,000 U.S. dollars for a children's charity by spending the next few weeks eating, sleeping and working among hundreds of Australia's famously dangerous, eight-legged inhabitants.

"I am a bit silly doing what I am doing," Le Souef said of his decision to closet himself with potentially lethal redbacks as well as tarantula-like huntsmen and black house spiders, which also have nasty bites.

"Redbacks are potentially lethal but there hasn't been a death from a redback bite in a long time since anti-venom was developed decades ago ... (but) I know I am not going to get bitten," he told Agence France Presse.

Le Souef said the spiders, who will live with him in the 3.6-by-1.2-meters window of his opal shop, will have better things to munch on, including the live cockroaches and crickets he is providing for sustenance.

"Some of them will get caught up in webs and some of them the huntsmen will chase and devour," he said.

Le Souef said he planned to start his challenge accompanied by 400 spiders, some of which are as big as the palm of a human hand, but had been thwarted by the spiders, which had been eating each other over the weekend.

"There's a massacre going on," he said, adding that different species of spiders tend to "fight to the death no matter what". Le Souef said more spiders would be brought for his charity stint in Melbourne.

Le Souef, who completed a similar challenge about 30 years ago by living in a cage with spiders, said he would spend his time cutting opals and writing his memoirs.