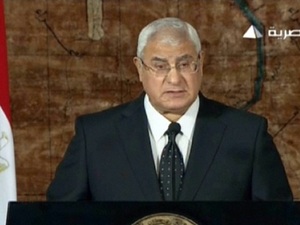 Egypt said Sunday a panel has been formed to probe the violence that has plagued the country since June 30, when millions demanded the resignation of Islamist president Mohammed Morsi.

Egypt has been rocked by militant attacks and street clashes since the army ousted Morsi on July 3 following massive protests against his year-long rule, leaving the country bitterly polarized.

Interim president Adly Mansour issued a decree Sunday to form an "independent fact-finding committee that will investigate the incidents that happened from June 30 onwards," a statement issued by his office said.

It said the five-member panel headed by judge Fuad Ryad has to submit its report within six months.

Since Morsi's overthrow the military-installed authorities have launched a sweeping crackdown on his supporters, jailing thousands of Islamists, including virtually the entire top leadership of his Muslim Brotherhood, which prevailed in a series of polls held after the overthrow of Hosni Mubarak in 2011.

Subsequent demonstrations by Morsi supporters have set off deadly clashes with security forces and Morsi opponents.

Islamist extremists ransacked churches and other Christian institutions in the countryside following Morsi's ouster, and militants in the restive Sinai have stepped up attacks against security forces.

Egyptian and international rights groups have repeatedly called for a probe of the violence.

On December 10, a joint call was issued by 13 Egyptian and international human rights organizations, including Amnesty International and Human Rights Watch, to investigate the August 14 crackdown.

They said an investigation must be launched into the killing of "up to 1,000 people by security forces."

"As a first step toward accountability, the government should establish an effective independent fact-finding committee to investigate responsibility throughout the chain of command for the unlawful killings," the rights groups said.