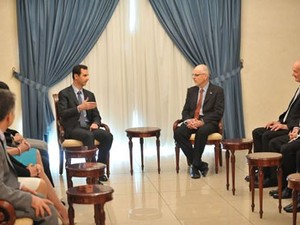 President Bashar Assad of Syria, which has been ravaged by conflict for almost three years, said Monday his country is being confronted by a major offensive by Islamist extremists.

"The country is facing a takfiri ideology," Assad said, using a term for Sunni Muslim extremists.

"This is terrorism without limits, an international scourge that could strike anywhere and anytime," he said, quoted by the official SANA news agency.

Assad made the remarks while receiving what SANA said was a delegation of "academics, researchers and activists" from Australia who had came to express "solidarity" with his regime.

The president also criticized Western leaders, who "behave with duplicity and act according to their selfish interests, without understanding the reality or nature" of the Syrian conflict.

The United States, Britain and France are among several Western countries that have thrown their support behind moderate opposition factions seeking to oust the Assad regime.

Syria's armed uprising began as a series of peaceful democracy protests 33 months ago but escalated into a full-blown civil war after Assad's regime launched a brutal crackdown on dissent.

The conflict is estimated to have killed around 126,000 people and displaced millions more.