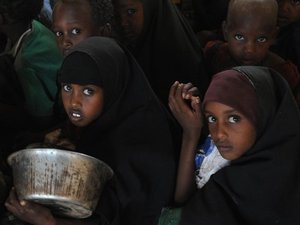 The World Bank on Monday pledged more than $500 million (348 million euros) to aid the drought-stricken Horn of Africa region, as United Nations aid chiefs met in Rome to discuss ramping up relief efforts.

The bulk of the money will go towards long-term projects to aid livestock farmers while $12 million will be for immediate assistance to those worst hit by the crisis and facing starvation, the World Bank said in a statement.

"The recurring nature of drought... calls not only for immediate relief from the current situation but also for building long term drought resilience," Obiagelii Ezekwesili, World Bank vice president for Africa, was quoted as saying.

The worst drought in the region in 60 years has triggered a famine in two regions of southern Somalia and forced hundreds of thousands to flee their homes.

The dry spell has hit hardest in war-torn Somalia but has also wreaked havoc for farmers across the region in Djibouti, Ethiopia, Kenya and Uganda.

"Agriculture is more vulnerable to climate change than any other sector. We need a major international effort to address this challenge now," he said.

The World Bank said in April that rising food prices have pushed 44 million people into poverty since June 2010.

It has called for action to support small holder farmers with seeds, fertilizer, better weather forecasting and improved access to markets.