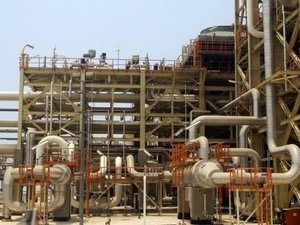 Iran, Iraq and Syria inked on Monday a Memorandum of Understanding for the construction of pipelines designed to deliver Iran's natural gas to the two Arab nations, local media reported.

"The overall cost of the project is estimated around $10 billion," deputy oil minister and chairman of the Iranian National Gas Company (NIGC), Javad Ouji, was quoted by the Mehr news agency as saying after the signing ceremony.

The construction of pipelines stretching for several thousand kilometers (miles) "should take three to five years once funding is secured," according to an estimate by Ouji on Sunday.

Aliabadi quoted by the oil ministry news service dubbed the inking of MoU as sign on "strengthening and deepening trilateral relations."

According to Mehr, the document envisages setting up within a month three working groups to look respectively at the technical, financial and legal aspects of the project, which has been under discussion since 2008.

"Soon the feasibility studies will be given to an international consultant," Ouji said without detailing any timetable.

The Iranian official had on Sunday said he hoped the final agreement launching the project could be signed before the end of the year.

Iran has the second largest proven gas reserves in the world after Russia.

It currently consumes almost all of the approximately 600 million cubic meters (21.8 trillion cubic feet) per day of gas production, but hopes to double its output and export some 250 million cubic meters per day to its neighbors and to Europe from 2015 through developing a giant offshore gas field in the Gulf, which it shares with Qatar.

The project signed Monday calls for the construction of a 56-inch (142 centimeter) pipeline with a capacity of 110 million cubic meters a day, connecting Assalouyeh to Iraq and then to Syria, with the possibility of extending to Lebanon and Europe.

Iran and its eastern neighbor Pakistan earlier this year signed an agreement to build a pipeline designed to provide 21 million cubic meters a day of Iranian gas to Islamabad commencing 2014.

Ultimately, Iran plans to use the Iraq-Syrian pipeline to export gas to Europe, officials have said.

Iran is under severe international sanctions, aimed in particular at its energy and banking sectors, due to its controversial nuclear programme.

These sanctions have complicated the development of Iranian capabilities to export gas. All major Western oil companies have withdrawn from Iran in recent years, including from projects in South Pars, under pressure from Tehran's archfoe, Washington, and from the European governments.

Iranian and Chinese firms have taken over most of the abandoned projects, often creating technical and financial problems that have resulted in delays.

Iran in 2010 also had to abandon two major projects for the export of LNG -- an alternative to the construction of pipelines -- after the withdrawal of French Total and the Anglo-Dutch Shell group.

"Iraq tries to strengthen its relations with all countries, particularly its neighbors, and America's sanctions cannot influence this issue," Iraq's Luaybi was quoted as telling Iran's official IRNA news agency.

"The signing of the trilateral MoU ... is in itself another sign that Iraq is not influenced by America's policies with regards to Iran sanctions," he said.