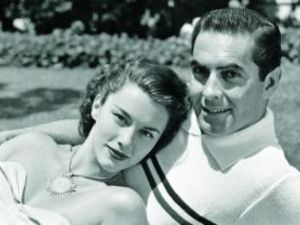 Christian, who starred in the 1954 television adaptation of Ian Fleming's debut novel "Casino Royale" about 007 agent James Bond, died in Palm Desert, California on Friday after a battle with colon cancer.

She was born in 1923 in Mexico, the daughter of a Dutch oil executive and his German-Mexican wife, with whom she traveled the world, becoming fluent in seven languages.

Christian made her debut in 1944 in "Up in Arms," before marrying Power in 1949. The couple divorced in 1956, two years after her role as Valerie Mathis -- aka Vesper Lynd -- the love interest of 007 played by Barry Nelson.

The actress, who later married English actor Edmund Purdom, is survived by daughters Romina and Taryn Power and eight grandchildren.

The first big-screen Bond movie was "Dr. No" in 1962, starring Sean Connery and featuring Ursula Andress, who famously emerged from the sea in a white bikini, in her role as Honey Ryder.