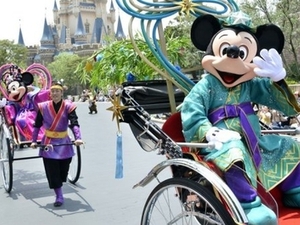 Entertainment company Cirque du Soleil will withdraw from Tokyo Disney Resort at the end of the year, the theme park's operator said Monday, citing the impact of the March 11 quake-tsunami disaster.

"It is with regret... that due to the effects of the Great East Japan Earthquake, the business environment for this theater has greatly changed," amusement park operator Oriental Land said in a statement.

"Based on a review of the expected results and the long-term viability of the show, it was mutually agreed that the business environment would remain extremely difficult. Therefore it was decided to close the show."

Performances of the circus company's "ZED" show will end on December 31, it said, adding that it had enjoyed strong business success since Cirque du Soleil opened a permanent theatre in October 2008 in the Disney Resort.

Tokyo Disneyland and DisneySea closed for 20 days after the quake and tsunami hit eastern Japan, depressing the combined visitor figure for the 2010 fiscal year to March 31 by 1.8 percent on-year to 25.4 million people.