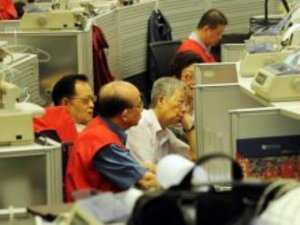 Investor sentiment was also shaken after Moody's ratings agency sharply downgraded Greek debt -- and warned that the Eurozone rescue was almost certain to trigger another one-notch cut to default status.

The Euro rose to $1.4370, while the dollar hit the lowest level against the yen since just after Japan's March 11 earthquake.

And gold scored another record high price of $1,624.07 per ounce in overnight deals as investors flocked to the safe-haven precious metal.

Meanwhile in Oslo, the country's stock exchange ground to a halt at noon on Monday as Norway fell silent in honor of the 93 victims of last Friday's twin bomb and shooting attacks.

And Shanghai slumped 2.96 percent in its worst single-day percentage fall since January 17, after a fatal high-speed train crash prompted a sell-off in rail firms.

"The prospect of a US default looms," warned Capital Spreads dealer Jonathan Sudaria.

"Up until now markets had assumed that an increase of the debt ceiling, irrespective of the financial conditions thrashed out in Congress, was inevitable.

"However, the staunch resolution by both sides not to compromise has left traders to re-price the probability of a default."

The White House and top lawmakers scrambled on Monday to reach a deal to save the world's richest country from a disastrous default on its debt, amid fears that inaction could affect markets around the globe.

Reid said there was no progress with Republicans because of the rival party's "continued insistence on a short-term raise of the debt ceiling."

He said Democrats were working on a measure to raise the $14.3 trillion U.S. debt ceiling, allowing Washington to pay its bills past an August 2 deadline, while cutting $2.7 trillion in spending over 10 years.

The strategy, detailed by a Democratic official on condition of anonymity, would also achieve Obama's goal of avoiding another politically painful vote on the issue before he faces reelection in November 2012.

City Index analyst Joshua Raymond said that investors felt that a deal would be done.

"Time is running out for there to be a deal... but one gets the feeling that investors still think that deal will come, or we would have likely seen a much more severe reaction in the financial markets," Raymond said.

"When U.S. markets open for trading early this afternoon, we will get a better picture of how much real concern there is amongst investors."

Eurozone leaders and private creditors agreed on Thursday to give Greece a new 159-billion-euro ($229-billion) bailout, risking a potential default to prevent the debt crisis from spreading.

Greece was hit hard with a debt downgrade on Monday and a warning from Moody's rating agency that default status is almost certain.

The rescue raised the chances that Greece could stabilize and reduce its debt, and it helped the Eurozone by "containing the severe near-term contagion risk that would have followed a disorderly payment default," Moody's said.

The agency, downgrading Greek debt by three notches to only one notch above default status, gave a muted assessment of the long-term effects for the Eurozone of the complex rescue.