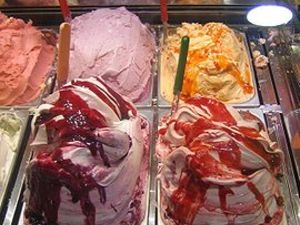 As she scoops out some mouth-watering ice cream during training at Italy's "Gelato University", Holy Randrianasolo dreams of setting up the first gelato parlor in her native Madagascar.

The 44-year-old is one of thousands of students from around the world flocking to courses near Bologna in central Italy at the headquarters of Carpigiani, the leading global manufacturer of ice cream making machines.

"My project is to open an Italian ice cream parlor in Antananarivo. There aren't any," said Randrianasolo, currently a textile business executive.

She spoke in an unusual type of university laboratory, surrounded by multi-colored vats filled with a bewildering array of gelato flavors.

The lab produces traditional tastes like raspberry, hazelnut or lemon, but there are also more innovative flavors like fennel and mortadella.

There are even more advanced lessons in management and marketing.

Students pay around 800 euros ($1,138) a week for the courses and are housed in a hotel in the small town of Anzola dell'Emilia in a region that has given the world Lamborghini cars, Ducati motorbikes and Bolognese sauce.

The school's director Kaori Ito, a 31-year-old of Japanese origin who has lived in Italy for the past seven years, said the stereotype that ice cream parlors are always run by old-school Italian immigrants is changing fast.

"This is the first year in which the participation of Italians is less than 50 percent. We've added courses in English and French and there's been a real boom in people signing up," said the multi-lingual executive.

Luciano Ferrari, 53, a "professor" at the ice cream university wearing a smock and glasses , said the face of gelato is increasingly non-Italian.

"Before it was always the Italian who brought ice cream abroad. Now ice cream is being exported by foreigners who come here and learn and then bring the skills back to their own country," Ferrari said after delivering a lecture.

"We teach people the art of Italian artisanal ice cream. These traditions go back hundreds of years and have spread around the world," he said.

Gelato as we know it today is believed to have been created for the courts of Italian Renaissance princes and first exported abroad by an Italian pioneer, Procopio Cuto, who opened a cafe in Paris in the 17th century.

Carpigiani, which was set up by two brothers in 1946, also has production sites in China, Spain and the United States and employs around 400 people worldwide. The company is planning to set up a gelato museum next year.

One particularly keen student at the "Gelato University" is 25-year-old Kevin Koh, who works for his father's fruit import company in Singapore.

"I've been a fan of gelato since when I was young," he said.

"There are quite a few gelato and ice cream parlors in Singapore but I haven't really come across one that is of the same standard as in Italy. So hopefully I can come up with something good to bring back home," he said.

Yasmeena Abdel Ghani, 29, said she was attending the course with her husband from Dubai for an original kind of holiday in Italy and to learn how to make some real Italian ice cream to impress her dinner party guests.

"I love gelato a lot and my husband has a passion for it. I'm having lots of fun! I think I'm going to do it more in the future," she said.

"We have a different kind of ice cream. Arabic ice cream is very gummy. They only have vanilla and pistachio," she added.

Nur Schnitzer, 21, a half-Jewish half-Arab Israeli said he was keen to open an ice cream parlor in the port of Jaffa. "It's the best thing I've ever tasted! I've been eating it since I was young," he said.

Among the students from Western Europe and the United States who are on the course, many see the gelato business as a way of changing pace.

Andrea Morelli, 37, a former Italian bank manager, said he really wants to move to Key West in Florida next year with his wife and open a gelateria.

"I decided to change my life around," he said. "I started this course in January and I completely fell in love with making ice cream."

He said he would adapt to American tastes and serve up pancakes and maple syrup as well. "We've decided to call it 'Ambassadors of Gelato'".