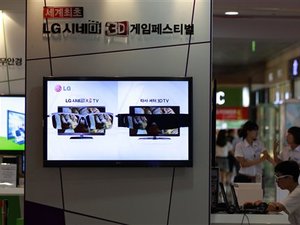 The result snapped two straight quarters of net losses for the Seoul, South Korea-based company, which has been making a push into 3D TVs and smartphones. LG has been trying to turn around its mobile phone business amid tough competition in the fast growing global smartphone market.

Sales in the second quarter fell 0.2 percent to 14.4 trillion won.

LG's mobile communications business, which includes phones, suffered its fifth straight quarterly operating loss in the second quarter. But in a sign of improvement the scale of red ink declined sharply on higher smartphone sales and cost-cutting.

LG said it sold 24.8 million mobile phones during the quarter, up slightly from 24.5 million in the previous three-month period. The company sold over 10 million Optimus smartphones in the first half of this year, according to company spokesman Ken Hong.

LG's results were also hurt by a loss of 56 billion won from investments in affiliates including flat panel maker LG Display Co. and LG Innotek, which manufactures electronic components.

Results were brighter in TVs. LG's home entertainment business saw sales decline 5.4 percent from the year before, but the unit recorded a profit of 90 billion won compared with a loss of 26 billion won the same quarter last year. Sales increased at the company's home appliance and air conditioning businesses, though profitability weakened from the year before.

"We expect profitability of our television business to improve next quarter but overall sales and profits will likely decrease as we reduce shipments of lower-end phones to focus more on the high-end," said LG's chief financial officer David Jung, according to Hong, the spokesman.

Separately, rival Samsung Electronics said Wednesday that it has sold more than 5 million units globally of the Galaxy S II, the latest version of its flagship smartphone, since it went on sale in late April.