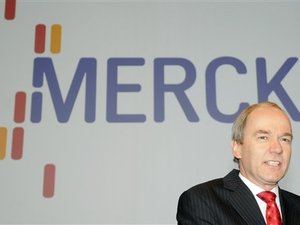 German drug and chemicals company Merck KgaA on Wednesday lowered its earnings outlook after reporting a loss for the second quarter, when it wrote down the value of its acquisitions Serono and Millipore.

The company cited a string of one-time charges in its earnings release, several of them related to the acquisitions of Swiss drug firm Serono and Millipore, which makes membranes used in laboratory work and food and beverage production.

It wrote down the value of its Merck Serono division by €263 million and Millipore by €46 billion. There were also charges for drugs acquired along with Serono whose business value has since fallen.

Other costs included €161 million related to an underused factory in Switzerland, and €20 million for the remaining costs of halting work on multiple sclerosis drug Cladribine.

As a result, the company lowered its full year earnings targets. That spooked investors, who sent shares in the company down 5 percent to €3.90 in mid-morning trading German time.

Merck says it expects operating profit of about €1 billion this year, down from a forecast of €1.5 billion-€1.6 billion made in the first quarter. Without the charges, full-year operating profit would have been €1.4 billion. The company lowered its sales growth forecasts for each of its four divisions.

"While a series of one-time charges adversely affected this quarter's profits, this will give us a healthy basis on which our new management team can build," said CEO Karl-Ludwig Kley.

Merck took over Serono in 2007, but the company said it was still making adjustments. "Improvements are still needed, especially with respect to the quality of the pharmaceutical pipeline as well as internal processes and structures," the company said in a statement.