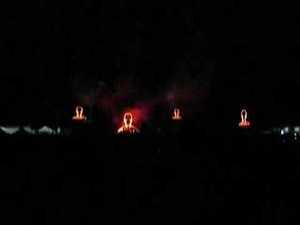 As Japan plunged into crisis with a triple earthquake, tsunami and nuclear disaster in March, organizers of the Fuji Rock Festival were faced with a choice over whether the show should go on.

However, Fingers -- aka John Moylett -- a pop pianist and founding member of new wave band The Boomtown Rats featuring Bob Geldof, said it was clear that staging the festival this year would give tens of thousands of fans a release from the steady drum beat of bad news.

"Being the first major gathering of its kind this year in Japan, Fuji Rock will definitely be very emotional," said Fingers. "Many will want to voice their feelings, both artists and the audience."

A number of Japanese music festivals will take place this summer as the nation strives to return to a semblance of normality following the disasters that ravaged its northeast coast and left more than 20,000 dead or missing.

Tokyo and Osaka will host Summersonic in August, boasting the likes of The Strokes and The Horrors.

The Rock in Japan Festival will take place in Ibaraki prefecture, at a site just 120 kilometers (75 miles) from the Fukushima nuclear plant which was crippled by the tsunami, triggering reactor meltdowns and explosions.

Fuji Rock, which opens Thursday through Sunday, is Japan's biggest and most internationally recognised festival but has faced adversity before, when first put together by founder Masa Hidaka.

The inaugural event, which drew 30,000 people, was held at a Mount Fuji ski resort in 1997. Halfway through a headline set by the Red Hot Chili Peppers the then one-day festival was cancelled due to a typhoon.

These days the three-day event attracts around 125,000 people at its current venue far from Fuji, at the picturesque Naeba Ski Resort in Niigata.

Just over an hour's train ride out of Tokyo, the mountain festival is as famous for rainy weather as the bands it attracts, but it is also regarded as one of the best designed, cleanest and most environmentally conscious events of its kind.

Western acts rub shoulders with Japanese favourites at the festival which costs 42,000 yen ($540) for three days.

But with the basic lineup and logistics of the festival put together months in advance, the tragic events of March 11 left organisers scrambling to reassure overseas acts as a cascading disaster unfolded.

Challenges grew as foreign governments advised their nationals not to come to Japan, as panic spread over the radiation leaking from the Fukushima plant.

"We had to clearly inform artists and their managements, with the local reports on the situation rather than the international media and TV news crews which arrived and ran some terrible misinformation," said Fingers.

"When the United States eventually lifted its travel warning to Tokyo and all other areas outside the 50 mile zone (around the Fukushima plant recommended by the U.S.) and other countries followed their lead, it gave agents, managements and artists confidence," he said.

Three bands considered cancelling over the disasters but only one ended up doing so, said Fingers.

Fuji Rock will this year collect donations for Fukushima prefecture to help with earthquake and tsunami damage as well as the impact of radiation leaks from the atomic plant.

Famed for being an environmentally conscious festival, it will also hold an anti-nuclear, solar-powered event "Atomic Cafe Festival" on the sidelines in support of natural energy and what it calls "the promotion of the shift of attitudes in society."