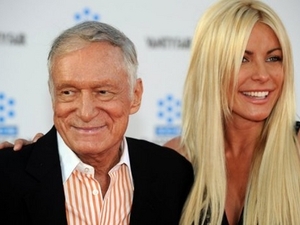 Hugh Hefner's 25-year-old former fiancee took a parting shot at the Playboy founder Tuesday, saying she had never been turned on by him and they only had sex once.

Crystal Harris, who called off the California nuptials with the 85-year-old in June, said she had never seen her former husband-to-be naked.

"I'm not turned on by Hef, sorry," she told "shock jock" Howard Stern, adding that the only time they made love it lasted "like two seconds... Then I was just over it...

Hefner asked Harris to marry him during a party last Christmas Eve, and a wedding had been planned last month at Hefner's Playboy Mansion, a luxurious Gothic-style mansion in Beverly Hills.

But just days before, he tweeted: "The wedding is off," adding" "Crystal has had a change of heart."

At the time Harris did not explain why she dumped Hefner, except to say on her Twitter account that the decision came after "much deep reflection and thought" and that she continues to have the "utmost respect for Hef."

The wedding would have been Hefner's third.