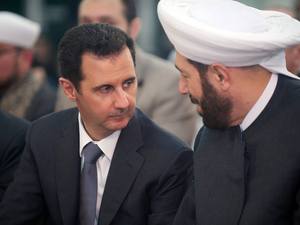 Syria's President Bashar Assad made a rare appearance on Sunday to attend prayers at a mosque in the capital Damascus, state television reported.

Assad, who has only been seen in public a few times since the Syrian conflict erupted in March 2011, was shown at the a-Hamad mosque in the capital's northwest for prayers marking the birthday of the Prophet Mohammed.

Assad's last public appearance was on October 15 for prayers at the time marking the Muslim holiday of Eid al-Adha.

His latest appearance came as Western powers stepped up pressure on Syria's divided opposition to enter talks with Assad's regime at the start of a new round of diplomatic efforts to end the country's 34-month conflict.

Al iman is dripping from his nostrils.
Ya khayi sho mo2min.
Legend has it that if you are lucky enough to rub bashars neck with your hands , you will receive baraka.
And Allah will forgive all your sins.

Loool. He and his munafiq mufti make me sick. Criminals should stay from religion!

see what happens, i talked about saint bashar and got voted down by his spirit.
i hope he doesnt visit me tonight in my sleep to choke me and give me nightmares.
dastoor min khatrak ya bashar.......dastoooooor.

Well woopty doo! The Giraffe of Damascus makes an appearance.