String of Hits Brings Smile Back to Bollywood 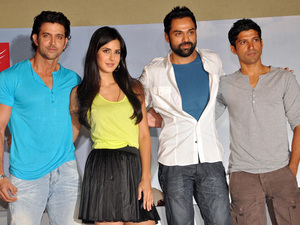 Bollywood has had a better start to the second half of 2011 after a tough first six months of empty cinemas and postponed releases caused by clashes with major cricket tournaments, analysts say.

Long queues and "house full" signs have returned to cinemas in India's entertainment capital Mumbai and across the country since the start of June for a string of films that have proved a hit with audiences.

The upward trend started after the end of the back-to-back World Cup and Indian Premier League (IPL) cricket tournaments with the Salman Khan action comedy "Ready".

The boxofficeindia.com website, which tracks industry takings, on Wednesday said that "Zindagi" had taken 443.2 million rupees ($9.9 million) since it opened on July 15, calling it a "hit".

"Double Dhamaal" was assessed as "above average" with takings of 452.1 million rupees in four weeks, according to the site.

"Singham", a crime drama starring Ajay Devgn, has had rave reviews since it came out last week and is also expected to do well.

"We've never had it so good. We've never had four successes back to back," said trade analyst Komal Nahta, referring to "Ready", "Double Dhamaal", "Murder 2" and "Zindagi".

"They were good films. There weren't too many releases in March or April but thereafter 'Ready' worked and the other films worked," Nahta, who writes for India's biggest film trade journal, Film Information, told AFP.

"When the World Cup and IPL were on there wasn't much filmed entertainment, so there was a hunger for films and people rushed to the cinemas."

The Indian releases had been expected to suffer as they hit screens around the same time as the last installment of the Harry Potter series, "Harry Potter and the Deathly Hallows: Part 2" and the latest "Transformers" movie.

The boxofficeindia.com site said that first-week takings for the English version of the final Potter movie were 102.6 million rupees and 61.4 million in Hindi, as of Wednesday.

The results were more positive news for the Indian film industry, which has seen overall revenues fall 20 percent in the past three years from $2.3 billion in 2008 to $1.85 billion in 2010.

Poor quality content, rising overheads, the global economic crisis and an increase in other ways for people to spend their spare time have all been blamed for the downturn.

Vinod Mirani, another industry analyst, said the recent successes proved that good films would work no matter what.

The film has already proved controversial as it tackles the sensitive issue of reserving posts in the government and education sector based on caste.

"In fact, controversy more often than not helps a film," he added.