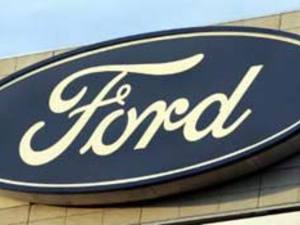 U.S. auto giant Ford said Thursday it would invest $1 billion to build a second vehicle assembly and engine plant in India as it ramps up production to exploit the country's burgeoning car market.

India has become a battleground for global car manufacturers such as Ford, GM and Toyota which hope to offset sluggish domestic sales by steering towards India and China, seeing huge potential in their billion-plus populations.

"Ford has very aggressive expansion plans in India and in Asia Pacific and Africa," and this investment in the western state of Gujarat "will be important in realizing our growth strategy," top Ford executive Joe Hinrichs said.

The new factory in Sanand, 40 kilometers (25 miles) from Gujarat state's main city of Ahmedabad, will employ 5,000 workers and be Ford's second in India after its vehicle and assembly plant in the southern port city of Chennai.

Gujarat has emerged as an investment magnet for car and other manufacturers with its business-friendly policies, despite controversy surrounding its Hindu nationalist chief minister, Narendra Modi, who is accused of turning a blind eye to deadly anti-Muslim riots in 2002 -- an allegation he rejects.

Modi said in a statement that Ford's investment "will further strengthen the capability of Gujarat as an auto hub."

The Gujarat operations will have initial annual capacity of 240,000 vehicles and 270,000 engines. Ford's Chennai plant near can assemble up to 200,000 cars and will raise its engine-making capacity to 330,000 by next year.

Ford's announcement, which hikes its investment in India to $2 billion, comes as the Detroit-based automaker stretches its reach in Asia where it is constructing or planning to build seven factories in Thailand, China and India.

The Gujarat plant will help Ford boost global sales by nearly 50 percent by mid-decade to eight million vehicles a year. Up to 70 percent of growth is seen coming from the Asia Pacific and Africa regions over the next 10 years.

"This is an investment in the future of Ford globally," Hinrichs, president of Ford Asia Pacific and Africa, said.

Last year, Ford launched its Figo subcompact in India and has sold more than 100,000 units, tripling the company's sales in the country.

But Ford still has only three percent of India's market, which grew nearly 30 percent last year to 2.5 million vehicles. The Figo was part of Ford's goal of adding eight models to its India lineup by 2015.

Ford would give no targets for future Indian growth but said it was "bullish."

The U.S. group will start work on the Gujarat site this year with the first vehicle and engine slated to come off assembly lines in 2014.

India's car sales growth is forecast to slow to 10-12 percent as a streak of interest rate hikes to brake double-digit inflation raise borrowing costs but it is still the world's second fastest-growing after China.

"The ride up won't be in a straight line," he said. "But growth will be order of the day with more people driving, infrastructure improving, incomes rising."

With just one in 10 households in urban areas owning a car and one in 50 in rural areas, India remains a highly under-penetrated market.