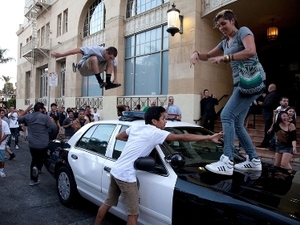 Police fired beanbags to disperse revelers who threw bottles and other objects on Hollywood's main tourist drag Wednesday, outside the premiere of a rave-inspired documentary.

The unrest broke out when police tried to disperse hundreds of people, who at one point jumped on a police car outside the Graumann's, which is next door to the Kodak Theater where the Oscars are held.

A DJ who was due to host an after-party following the private screening had used his Twitter feed to announce a block party at 6:00 pm outside the theater, but urged calm after the unrest erupted.

"Everyone chill now!!! The block party has officially been shut down! But this is too crazy and we need to be safe!" DJ Kaskade tweeted.

Officers sealed off the section of Hollywood Boulevard, which attracts millions of tourists every year to see the glitter of Tinsel Town including the world-famous Walk of Fame celebrity stars.

By the end of the evening Los Angeles Police Department (LAPD) spokeswoman Karen Rayner said the unrest was winding down. Two people were arrested on suspicion of vandalism, and three police cars were damaged, she said.

Insomniac Inc., which organized the screening of the film about a dance music festival in southern California, said it was "disappointed that a small group of people would try to mar a private documentary screening," said the LA Times.