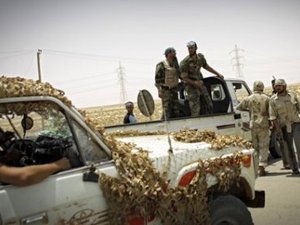 Libyan rebels seized the town of al-Ghazaya near the Tunisian border Thursday as part of a pre-Ramadan offensive aimed at unseating strongman Moammar Gadhafi.

The heaviest fighting was on the eastern side of the town, some 12 kilometers from the border with Tunisia, in a two-pronged attack that also came from the west and began around 8:00 am (0600 GMT).

The capture of al-Ghazaya, being used as a base by Gadhafi troops to fire rockets onto rebel forces in nearby Nalut town, followed a defiant speech by the Libyan leader that he is ready to "sacrifice" to ensure victory in the civil war.

The early morning assault from the surrounding mountains was part of the offensive by the rebels aimed at marching on Tripoli and toppling Gadhafi.

Initial attacks had begun on Wednesday, a military source told an Agence France Presse correspondent in Zintan, in the Nalut region of western Libya.

Before the rebels overran the town, an AFP correspondent watching through binoculars saw dozens of army vehicles pulling out in the face of rebel artillery fire from heights overlooking al-Ghazaya.

The mountainous Nafusa region has seen some of the fiercest fighting between loyalist troops and rebel forces.

The two sides had fought their way into a stalemate five months after the start of a popular uprising that quickly turned into a civil war.

The Libyan leader controls much of the west and his Tripoli stronghold, while the opposition holds the east from its bastion in Benghazi.

A defiant Gadhafi said late Wednesday he is ready to "sacrifice" to defeat the rebels after they warned the deadline for him to step down and stay in Libya has expired.

"We are not afraid. We will defeat them," Gadhafi said in an audio message, referring to the NATO alliance and the insurgents.

"We will pay the price with our lives, our women and our children. We are ready to sacrifice (ourselves) to defeat the enemy," he added in a message to loyalists in the town of Zaltan, also near the Tunisian border.

Gadhafi also called on his partisans to march on Nafusa and urged his opponents to surrender.

"Traitors, surrender your weapons ... Choose: death or surrender," Gadhafi told the rebels, adding that without support from NATO the insurgents could not have seized the strategic mountainous region.

Gadhafi's message came after the chief of the rebel National Transitional Council said in Benghazi that an offer they had made through the U.N. that would have allowed the strongman to remain in Libya if he stepped down had lapsed.

"We made a proposal. The deadline has passed. The proposal has expired," he told reporters of the month-old offer.

Under the offer, Gadhafi would have had to step aside and relinquish all responsibilities, his place of residence would be the "choice of the Libyan people" and he would be under "close supervision," Abdul Jalil said.

"The period of this proposal has passed," he said.

Meanwhile, Britain gave a major boost to the rebels by inviting them to take over the Libyan embassy in London, which the Gadhafi regime slammed, while Washington said it was examining a request by the rebels to recognize the insurgents.

In London, British Foreign Secretary William Hague said Wednesday his country has expelled all remaining staff at the Libyan embassy and recognized the NTC as Libya's sole legitimate government.

The rebels on Thursday said they had nominated Mahmoud Nacua, a Libyan exile, as their ambassador to London.

For his part, the NTC's Abdul Jalil said "we express tremendous appreciation for this recognition."

The council expects Britain and Turkey to become the first countries to release some of Libya's frozen assets, which he said "unfortunately have not been liquidated to date."

In that vein, Hague said Britain would also unlock £91 million ($149 million, 102 million euros) of Libyan oil assets frozen under a U.N. Security Council resolution so the rebels could benefit from them.