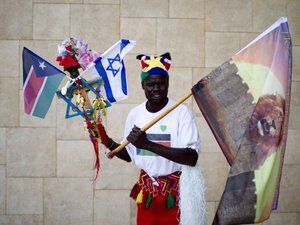 Israel and the newly independent country of South Sudan have established diplomatic relations, the Israeli foreign ministry said on Thursday.

"The cooperation between the states will be based on the firm foundations that guide them in forming friendly ties, out of equality and mutual respect," Foreign Minister Avigdor Lieberman said in a statement.

The Jewish state does not have relations with Khartoum, which it has accused of serving as a base for Islamic militants, and has instead supported the rebel movement of the mainly Christian and animist south in its decades of struggle against the government in the mostly Muslim north.

The practical aspects of the new relationship, including the appointment of ambassadors, would be discussed in the near future, the statement noted.

The South Sudanese government made a parallel announcement in the capital, Juba, to a delegation of Israeli diplomats in the city, the ministry said.

Israel had formally recognized the world's newest nation a few days prior to the conversation.

Ado.Australia.
Let the Palestinian have a state once and for all.
Let them suffer from their minister's corruption, as if it is not enough what the Palestinian leaders cutting their share of 15 pct for all goods entering the Palestinian territories. Ask Mr Dahlan he will tell you what he did with all his commissions on fuel and lpg entering to his people or ask Mr. Abu Mazen where did all settlements purchased their cement ? if not from his cement factory.
Only poor Hamas has to borrow the hanging trees from their friend Ahmadinejad as they can't have enough for so many accused for collaborating with Israel.
Welcome to the new Iranian branch in the Mediterranean.

Danny B, what a load of crap. Its true that the PA are corrupt but your leaders arent far away from being as corrupt. Your presidents/leaders are not only corrupt but you have a rapist among them and all of them have been or are war criminals. The success of israel comes from the US and Europe who made you and who gives you scientific aid, education aid etc, wheras the arab regimes get "aid" that is a bribery, meaning most of it is for the very corrupt leaders that they endorse and put in office and that aid is not even 5 % of the aid "israel" recieves. Stop thinking you achieved israel with your own mind and work, you were given a israel from the british colonializers and built it up for you from scratch (with the exception of what you stole) because Europe and the US gave you the right means to do it, including giving you a bunch of incompetent arab dictators to protect you while supressing the arabs as well as giving you a strong military. This was all GIVEN TO YOU.

To: Lebanese 1987-Don't understand me wrong.
I wish the Palestinian to have their government and suffer, same as we all suffer from our politicians, I'm sure also same in Lebanon the government is not to be proud of.
I can agree that we have corrupted politicians yes. being war criminals i doubt
As this stories of stolen land and other crap we can argue another 60 years.
Problem is in the Mediterranean is that all parties too dam right. this is reason for this long bloodshed.
The country whom should have been unharmed was Lebanon that for years been known as a moderate country with liberal people and kept borders quiet for many years.Since Lebanon made mistake and let PLO , Black September and other groups who planned their hostile activities against Israel from Lebanon your country was involved and paying the price. So don't call Israelis war criminals as they are no worse than your people who slaughtered one the other during 70s. there were manymore atrocities war crimes in Lebano

Danny b...The palestinians were forced on Lebanon after black September and even before that. We open our homes to our neighbors in need like good neighbors should and they help destroy our country in return. I wish Palestine is reconized as a start, and they will struggle with their corruption like the rest of the world. But will they be given a fighting chance? I doubt it. Israel, and their "Arab" friends will be just as bad. But it will be theirs and will be a start for the rest of the Palestinians to aim for a return. There are many Palestinian diaspora that can help them like the Jews for Israel and the Lebanese have... But Danny, why does bibi and Lieberman fear this vote so much??

Ado,-Australia. The Palestinian can get a chance for a country side by side to Israel. to your surprise the majority of Israelis are in favor.However if they dream to live instead of Israel, adopting the agenda of Hamas, they can forget it. We are not ready to destroy our country by letting becoming a 2nd Gaza this time from West Bank. If they want to live in peace, the Palestinian must sign that if they want return of refugees , only to the new state . about compensation, the moment the 1,2 million Jewish refugees who lived in Arabian state and were kicked out in 1948 leaving all of their property will be compensated then compensation to Palestinian might be considered. The Arabian world made of the Palestinian a big issue over 65 years, the longest time. Never heard same for millions people in Europe during WWII who were forced to leave or deported. they were settled long time ago all over.It seems that the open wound named Palestinian problem was convenient for Arab rulers.