Two Shot Dead as Syria Clamps Down ahead of Friday Demos 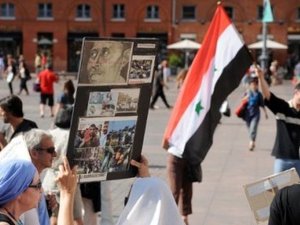 In the eastern city of Deir Ezzor, where security forces were carrying out operations in nearly all neighborhoods, two civilians were shot dead on Thursday night, said Rami Abdul Rahman, head of the Syria Observatory for Human Rights.

Afterwards, some 3,000 people gathered in front of the house of the new governor, Samir Othman al-Sheikh, to "demand an end to the killing," he said.

Earlier, residents were out in the streets trying to prevent security forces carrying out arrests, he said.

In Qatana, 25 kilometers south of Damascus, security forces armed with machine guns and other weapons arrived in the town in pickup trucks overnight and carried out the arrests before searching for more protesters.

The sweep came as people took to the streets of Damascus and Qatana to protest after security forces killed 11 people on Wednesday in Kanaker, 50 kilometers southwest of the capital, said human rights activists.

Among those said to have been detained were two prominent members of a national coordination committee for democratic change, the Observatory said.

Webhe is a leader of the Democratic Socialist Arab Union Party while Samadi is a well-known Islamic personality from Douma, a protest hub in Damascus' outer suburbs.

Around another 100 people were arrested overnight in raids on houses in Damascus, the London-based Observatory told Agence France Presse by telephone.

"A demonstration was held on Wednesday night on Khaled bin al-Walid Avenue in Damascus, bringing together many young men and women who blocked the avenue for a short time," said the Observatory.

Protests also took place after evening prayers in Qatana in support of Kanaker, a town of 250,000 people west of Damascus where forces killed 11 people on Wednesday, including a child aged seven, the activists said.

"The military erected a checkpoint at the entrance of Qatana where two tanks were stationed," said the Observatory.

State media quoted officials as saying that "law enforcement agents hunted for armed terrorist gangs that have been terrorizing the peaceful citizens of Kanaker."

"Four armed terrorist fighters were killed and two others were wounded in this successful and quality operation," government newspapers reported.

Syria has since March 15 been shaken by an unprecedented revolt against the regime of President Bashar al-Assad which accuses "armed terrorist groups" of wanting to spread chaos in the country.

Despite the ongoing crackdown, Facebook group The Syrian Revolution 2011, a motor of the protest movement, has called on people who have remained silent so far to mass Friday for yet more anti-regime demonstrations.

Security forces have arrested almost 3,000 people in the crackdown on the pro-democracy movement, which broke out in mid-March inspired by regime-changing revolts in Tunisia and Egypt.

"Avaaz has today revealed the identities of 2,918 Syrians who have been arrested by Syrian security forces and whose whereabouts are now unknown," the non-governmental organization said.

"The in-depth survey conducted by Avaaz estimates that one person is disappearing every hour.

"In the past week alone there have been more than 1,000 arrests and the number of enforced disappearances has been rapidly rising on a daily basis, as the regime steps up its efforts to repress dissent in the build-up to Ramadan," said Avaaz.

The group said it is establishing a website with photos and brief descriptions of those who have disappeared which would be regularly updated.

It added that it has been collaborating with two credible Syrian human rights organizations to collect the names and photos of each disappeared case "to ensure the list of names is wholly verified."

The resilience and determination of the Syrian opposition is admirable. The courageous Syrian people has become the only hope for lebanon's salvation.

Assad has already caused the death of 1400 peaceful demonstrators, 5 times the demonstrators killed in Egypt, a country four times larger than Syria. This is a crime of mammoth proportion and any Lebanese supporting this barbaric tyrant is a partner in crime and our youth should extradite them to Syria when Assad and his Junta will be facing Justice. Assad and his Useful idiots in lebanon should better start watching the trials of Mubarak and Bou Ali, knowing that his brutality, oppressive measures, corruption and impoverishment of his people far exceeded the Egyptian and Tunisian dictators. We Lebanese are eager to uncover his assassination plots in Lebanon, his Useful idiots and accomplices, and who he hired to carry the crimes. The truth will be known soon, no need for wikileak! The youth will have no mercy on all culprits!