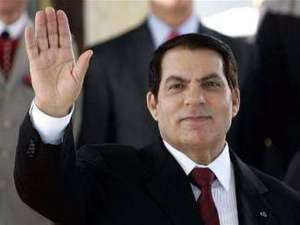 His daughter Nisrine was sentenced to eight years in jail and his son-in-law Sakhr al-Materi to 16 years on the same charges, which relate to properties bought in an upscale neighborhood of the capital Tunis.

Ben Ali, who fled to Saudi Arabia last January after a popular revolt against his 23-year rule, has already been sentenced in his absence to a total of more than 50 years in two separate trials.

On July 4, a Tunis court sentenced Ben Ali to 15 and a half years in jail for possession of arms, drugs and archaeological artifacts -- and fined him 54,000 euros.

And in June, Ben Ali and his wife Leila Trabelsi were sentenced to 35 years in prison and fined 45 million euros for misappropriating public funds after police found large sums of cash and jewelry in their palace.

Ben Ali denounced his first conviction as a "parody of justice" and a "political liquidation" in a statement issued last month.

But he and his entourage face possible legal proceedings in around 180 other cases.