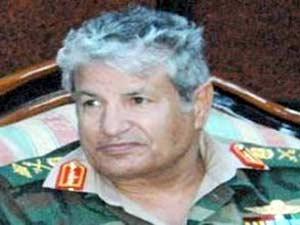 General Abdel Fatah Younes, commander of forces fighting to oust Moammar Gadhafi and once the Libyan strongman's right-hand man, has been killed, sparking fears of a violent backlash.

Younes was shot dead by an armed gang after he was summoned from the front by the rebel National Transitional Council "for questioning over military issues," NTC chairman Mustafa Abdel Jalil said late Thursday.

His killing, and that of two military officers, is seen as a sign of divisions within the ranks of the rebels in eastern Libya even as they make fresh advances in the west in a pre-Ramadan push to drive Gadhafi out.

"With all sadness, I inform you of the passing of Abdel Fatah Younes, the commander-in-chief of our rebel forces," Abdel Jalil said in a carefully worded statement at a press conference in Benghazi, the rebels' eastern capital.

"The person who carried out the assassination was captured," a somber looking Abdel Jalil said without elaborating. He added there would be three days of mourning in Younes's honor although his body is yet to be recovered.

Rumors circulated in Benghazi throughout Thursday that Younes, known as the number two in Gadhafi's regime prior to his defection in the early days of Libya's revolt, was arrested and killed by rebels but they could not be confirmed by AFP.

"I ask you to refrain from paying attention to the rumors that Gadhafi's forces are trying to spread within our ranks," Abdel Jalil told journalists after a lengthy closed door meeting with NTC members.

Locals in Benghazi said they feared the killing will spark violence in the capital, as members of Younes's tribe, leaders of which were at the press conference, or his troops, could look to settle scores.

Moments after the announcement, two vehicles loaded with an anti-aircraft gun and at least a dozen armed men shooting in the air arrived at Tibesti hotel, where the announcement was made.

At least three loud explosions shook the center of Tripoli late Thursday, as Libyan television reported that planes were flying over the Libyan capital, which has been the target of NATO air raids.

Al-Jamahiriya television reported that several "civilian sites" had been bombed by NATO on Thursday.

Libyan rebels seized two localities near the Tunisian border earlier in the day as part of their offensive ahead of the start early next week of the Muslim fasting month of Ramadan, an AFP correspondent said.

The first was the town of Al-Ghazaya, some 12 kilometers (eight miles) from the frontier and the second was Umm Al-Far, a hamlet of a few hundred inhabitants 10 kilometers northeast of there.

The assault on Al-Ghazaya began at around 8:00 am (0600 GMT) in a two-pronged attack from the east and west that appeared to have driven loyalists out, as the town was deserted when they entered.

However, ammunition was found stored in a school and other public buildings in the town.

The rebels then moved on to Umm Al-Far and bombarded it, blowing up a munitions dump. The hamlet fell around 5:00 pm, and rebels, mostly on foot, were moving through the streets to secure them a half hour later.

The capture of Al-Ghazaya, being used as a base by Gadhafi troops to fire rockets onto rebel forces in nearby Nalut town, followed a defiant speech by the Libyan leader that he is ready to "sacrifice" to ensure victory in the civil war.

The early morning assault from the surrounding mountains was part of the offensive by the rebels aimed at marching on Tripoli and toppling Gadhafi.