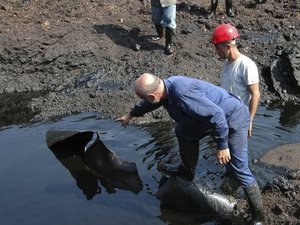 A bomb blast struck an oil pipeline in western Syria on Friday in what Syrian state television described as a "terrorist" attack, saying that a group of "saboteurs" was behind the explosion.

The TV said the bombing targeted the pipeline in the western town of Talkalakh between the cities of Homs and Tartous, near the Tal Hosh dam. The explosion left a 33 feet (10 meter) deep crater, the TV said.

Talkalakh is an opposition stronghold near the border with Lebanon that was overrun by army tank units, security forces and pro-regime gunmen in May after weeks of protests calling for the president's ouster.

Rights activists say around 35 people died in the deadly crackdown and siege of Talkalakh. Thousands of people fled to Lebanon to escape the offensive.

A blast and a fire struck a natural gas pipeline in eastern Syria on July 13. Some rights groups said the fire in Deir el-Zour province was an attack but Syria's Oil Ministry denied any explosion and said a fire erupted on a pipeline that was under maintenance.

Syria's oil exports are among the main earners of foreign currency for the government, particularly now that the country's uprising has hit the tourism industry. Last year, tourism accounted for roughly 12 percent of GDP and brought in $8 billion in hard currency.

Syria produces about 350,000 barrels of oil per day as well as natural gas.

The state TV said Friday's "terrorist attack sought to cause oil to leak into the dam's waters in order to damage agricultural crops in the area."

It did not mention any casualties or specific damage to the pipeline.

President ASSAD should kill all these terrorists before they distroy the country .

The oppressive regimes in Tunisia, Egypt, Libya, Bahrain, Yemen and Syria face opposition from the masses who cannot tolerate their oppression and corruption any longer.

I guess it's about time.