Tens of Thousands Rally for Unity at Cairo’s Tahrir Square 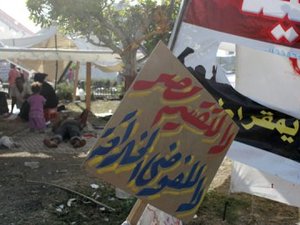 Tens of thousands of Egyptians rallied in Cairo's central Tahrir Square on Friday seeking to unify their demands despite rifts over key issues between liberal activists and Islamist groups.

Protesters carrying banners, flags and umbrellas to shield them from the punishing Cairo sun filled the square in one of the largest demonstrations since the popular uprising pushed President Hosni Mubarak from power in February.

Since then, activists have regularly returned to the square to keep up pressure on the military council that took control of the country after Mubarak's fall.

The Muslim Brotherhood, Egypt's best organized political force, and other Islamist groups significantly boosted the turnout after deciding to take part in Friday's rally. These groups had stayed away from recent demonstrations, leading to smaller crowds.

But the Islamists' participation also highlighted the growing rift between them and liberal activists. While saying the demonstration seeks to promote unity, Islamist groups have largely rallied their members to oppose the adoption of a set of guidelines for drafting a new constitution after parliamentary elections later this year.

Liberal parties endorse the measure in an effort to limit what they fear will be outsized Islamist influence on the new document, should religious groups win a large share of the parliament. The Supreme Council of the Armed Forces has accepted the idea.

Islamists oppose it, saying nothing should restrict the right of the new elected parliament to draft the document.

All protesters agree on a number of other key demands, including the end of military trials for civilians, a clear schedule for the transition to civilian rule and swift trials for former regime officials and those accused of killing protesters during the uprising, which left about 850 people dead.

The rally comes a day after Egypt's justice ministry said Mubarak, along with his two sons and eight other associates, will be tried at a Cairo convention center.

The announcement had little apparent effect on Friday's protest, mostly because most activists doubt Mubarak will actually stand trial Aug. 3 as planned.

Mubarak's lawyer and doctors treating him in the Red Sea resort of Sharm el-Sheikh have repeatedly reported that the 83-year-old ousted leader's health is failing, though Egypt's health ministry said he is fit enough to stand trial.