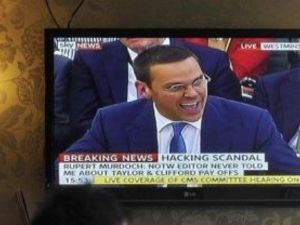 British pay-TV giant BSkyB offered its shareholders over £1.0 billion in payouts Friday as it moves on from a failed takeover bid and phone-hacking scandal involving Rupert Murdoch's News Corp.

The company meanwhile confirmed that Murdoch's son James would remain its chairman despite a phone-hacking row at the satellite broadcaster's main shareholder News Corp., which caused the breakdown of its bid for all of BSkyB.

The crisis had sparked calls for James Murdoch to resign the chairmanship of BSkyB, but the company's board has given him its unanimous support.

"Following the withdrawal of the News Corporation proposal, the board will return to normal processes. James Murdoch remains chairman," BSkyB said in its annual results statement.

BSkyB said its operating profits soared to £1.073 billion in the 12 months to June, compared with £872 million in the group's previous financial year and in line with market expectations.

BSkyB's shares were up 0.35 percent at 718.5 pence in midday deals on London's FTSE 100 index following the earnings news.

The company's stock had slumped from 850 pence to below News Corp.'s bid-offer of 700 pence in one week prior to the takeover deal's collapse earlier this month, knocking £2.5 billion off the firm's value.

BSkyB, which broadcasts live English Premier League football and blockbuster movies, said Friday it had increased its household subscribers to 10.3 million, a proportion of whom pay monthly fees to access its Internet broadband and telephone services.

"This has been a year of outstanding operational and financial results for Sky," James Murdoch said in the earnings statement.

"It is to the credit of Sky's first-class management team that the company has continued to deliver throughout the offer period that ended earlier this month."

He added: "We are pleased to announce both a 20 percent increase in the ordinary dividend and our intention to return £750 million to shareholders through a share buy-back program."

News Corp. had in June 2010 bid £7.8 billion for the 60.9 percent of BSkyB it did not already own. BSkyB rejected the 700-pence-per-share offer, while the bid was in any case withdrawn over the phone-hacking scandal.

"The clear message from the company is one of confidence for future prospects, with a £1 billion statement in the form of a buyback and hike in the dividend," said Richard Hunter, head of UK Equities at Hargreaves Lansdown Stockbrokers.

"In the medium term, the shares are unlikely to regain the heady heights of 850p after News Corp's withdrawal… and there could conceivably be some pressure to maintain the growth trajectory given the current (poor) economic backdrop."

It emerged earlier this month that the News of the World, News Corp.'s market-leading British Sunday tabloid newspaper, had hacked the voicemail messages of murdered 13-year-old schoolgirl Milly Dowler.