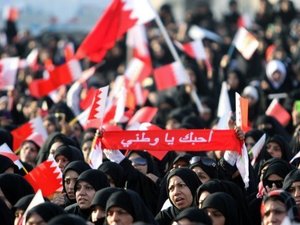 Bahrain's main Shiite opposition formation slammed the national dialogue's recommendations submitted to King Hamad on Thursday, saying they do not represent its demands or the will of the people.

The conclusions of the dialogue carried "none of our demands" and "the dialogue does not represent the will of the people," the Islamic National Accord Association (Al-Wefaq) said in a statement posted on its page on social networking website Facebook.

Al-Wefaq reiterated its demands for an "elected government," an "elected parliament which has full legislative powers," and a "fair and independent judicial system" in the Shiite-majority Gulf nation.

The national dialogue, which began early this month, was aimed at discussing reforms in the Sunni-ruled kingdom which was rocked by Shiite-led protests from mid-February to mid-March.

But the dialogue "might contribute in complicating the political crisis," Al-Wefaq said.

King Hamad on Thursday said the report on the dialogue "reflects the determination (of the participants) to rise above the latest incidents," referring to the month of deadly pro-democracy protests crushed by the authorities.

The king expressed his "support" for the recommendations that, he said, notably included "reinforcing the independence of the judicial branch and the consolidation of human rights" in Bahrain.

Al-Wefaq had decided only at the last minute to join the dialogue, encouraged by the international community including the United States whose Fifth Fleet is based in Bahrain.

But the group, which won 18 out of 40 seats in the lower house of parliament in the last elections, had only five representatives out of some 300 delegates invited to the talks.

On July 17 the Shiite grouping announced it was pulling out of the dialogue, saying it was not aimed at achieving serious results.

Khalil al-Marzooq, who led the bloc's delegation to the talks, said in a statement "we are still demanding a serious dialogue between the people and a representative of the king, which would lead to clear constitutional provisions."

Authorities say 24 people were killed in the unrest that rocked the tiny kingdom.

The theme all across the Arab spring (now that it's summer)?
My prediction: this revolution seeks to return the center of gravity to inside the nation. In each of thes nations, the state apparatus has depended on outside support. So the local people have felt intentionally neglected as it were--and cheated out of the rule of law.
When a party wins 18 out of 40 legislative seats and receives only 2% of the seats in a council of national dialogue, that tells you that the popular will is being intentionally overlooked.
So if the government does not depend on the people, what does it depend on? Something outside the nation: that seems to be the necessary conclusion.