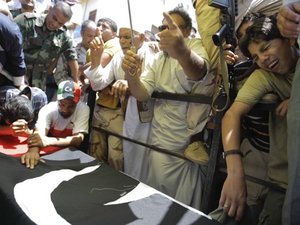 Libyan rebels were on Saturday probing the death of their army chief General Abdel Fatah Yunis, a murder the Gadhafi regime blamed on al-Qaida, as NATO warplanes targeted the strongman's "terror broadcasts."

"The NTC has appointed an investigative committee and we will publish all the facts of this investigation," said Ali Tarhuni, who handles economic affairs for the rebel National Transitional Council.

Yunis was the faithful right-hand man of Libyan leader Moammar Gadhafi, participating in the 1969 coup that brought him to power, before defecting to the rebels who have been fighting to oust the strongman since February.

Tarhuni said Yunis's bullet-ridden and partly burned body was found early on Friday on Benghazi's outskirts, but that the NTC had received news of his death late on Thursday when the head of a militia behind the crime confessed.

"The head of the militia is imprisoned now," Tarhuni said, adding that some of the perpetrators, who he said belonged to Jirah Ibn al-Obeidi brigade, were yet to be incarcerated, and the motive for the killing remained unclear.

Tripoli sought to pin the blame on al-Qaida.

"By this act, al-Qaida wanted to mark out its presence and its influence in this region" of eastern Libya controlled by the rebels, regime spokesman Mussa Ibrahim told reporters in Tripoli.

"The other members of the National Transitional Council knew about it but could not react because they are terrified of al-Qaida," he added.

NATO in Brussels said in a statement early on Saturday its warplanes had launched precision strikes on three Libyan television transmitters to silence "terror broadcasts" by the Gadhafi regime.

"Our intervention was necessary as TV was being used as an integral component of the regime apparatus designed to systematically oppress and threaten civilians and to incite attacks against them," it quoted alliance spokesman Colonel Roland Lavoie as saying.

Yunis's death, and that of two officers with him, left the rebels facing a leadership crisis on the same day they made fresh gains in the western Nafusa mountain range.

The United States urged the rebels to stand united and stay focused on ousting Gadhafi and blamed him for creating the conditions that led to the murder.

State Department spokesman Mark Toner said the rebels should "work both diligently and transparently to ensure the unity of the Libyan opposition."

"Such tragedies speak to the situation that's been created by Gadhafi and his regime. It underscores why he needs to leave power and do so immediately."

In London, Britain's minister for the Middle East and North Africa, Alistair Burt, condemned the assassination and extended his condolences to NTC Chairman Mustafa Abdel Jalil.

"We agreed that it is important that those responsible are held to account through proper judicial processes," he said.

Touchdown! That's a relaly cool way of putting it!